The most awesomest time of the year has arrived, bringing with it stuff like decorative corpses, mutilated pumpkins, bite sized candy, pumpkin beers, and a whole host of other nominally ghastly objects that suddenly become socially acceptable. Here at Kaedrin, we tend to drink a lot of beer (yeah, par for the course, I know) and watch a lot of bad horror movies (these tend to be chronicled on my generalist blog, so stop by and say hello if you’re so inclined). So look for some season’s greetings in the near future. And Sweetzels. Lots of Sweetzels. 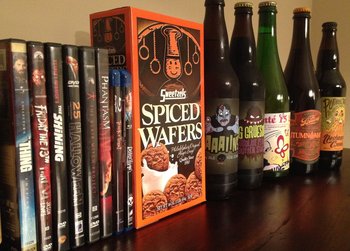 Speaking of Halloween themes, Tired Hands is getting into the swing of things with their series of beers named after various monsters. Last year were the classics: Vampire, Zombie, etc… Take a look at the fermenation board for a preview of this year’s fun: 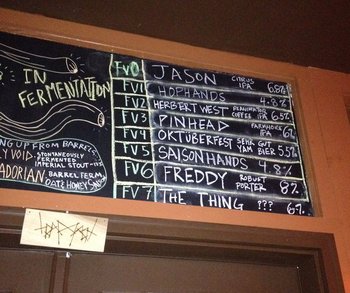 Yep, 80s horror monsters all the way. Not on the board, but mentioned by the bartender last time I was there, is Marty Rantzen (!), a suitably obscure choice that warms this jaded horror movie lover’s heart. Of course, these are just names, and it’s what’s in the glass that counts, but Tired Hands has more than proven themselves on that front and their nonsensical naming conventions only add to their charm.

Speaking of nonsense, check out this video I made on Vine after I got drunk on Saturday.

It’s no DDB video revue, but I think it turned out well given the approximately 30 seconds I put into it.

Incidentally, this is the sort of thing I’ve been posting on Twitter lately, so go there and follow me now (if you don’t already). Cheers.

2 thoughts on “Halloween and Other Nonsense”