It used to be that a new brewery would have to establish their bona fides for a few years, pushing out old standards like porters and pale ales, establishing a base on blandness, and only then rocking the world with something completely bonkers. In the parlance, you’ve got to earn your bullshit. But there’s something about the current beer craze has lead to new, often tiny breweries popping up and immediately dropping bombs on unsuspecting beer nerds. For example, Hill Farmstead started putting out amazing beers way back in… 2010. Earlier this year, they’re voted best brewery in the world. I suspect the same honor will be up for grabs from any number of new, idiosyncratic brewers that seem to be sprouting up at an amazing rate.

Heck, we’ve already covered two such candidates this week alone (not to mention recent fantastic offerings from Pipeworks, Half Acre, my beloved hometown wizards Tired Hands, and many others) and now we hit our third of the week: Sante Adairius Rustic Ales (aka SARA) has been making small batches of mind blowing beer in the small coastal town of Capitola, California for a year or so, but they somehow managed to establish an amazing reputation before they even opened. I’ve been following along on Jay’s blog, Beer Samizdat, for a while now, aching to get a chance to try anything from this brewery. When we put together a quick trade back in August, I was wondering if he’d be able to find some bottles (they’re apparently quite rare and released on unpredictable schedules) and was overjoyed to see not just one, but two offerings in my haul. Many thanks to Jay for being such a great American and snapping these up for me.

This first taste is a blend of barrel aged sour beers, one a dark saison they call Farmhouse Noir and the other a robust rye porter called Chavez. Love’s Armor has proven itself to be quite formidable, wreaking major havoc with my THAC0… 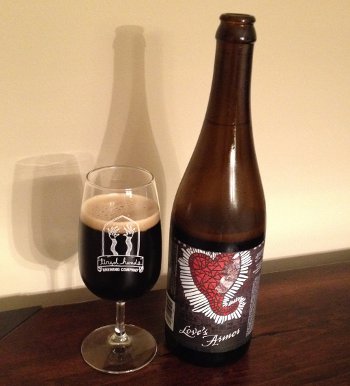 Sante Adairius Rustic Ales Love’s Armor – Pours a deep dark brown color with a finger of khaki head. Smells full of twangy funk, with an almost chocolate covered cherry sorta aroma that is beautiful. Sourness hits in the taste right up front, sour cherries, yielding to some chocolate malt, maybe even some roast in the middle, then heading back to sourtown for the finish. Nice leathery Brett funk, maybe tobacco, matched with a hint of oak too. Really complex, I keep picking out new subtleties as I drink, but also well balanced. Mouthfeel is well carbonated, not quite full bodied, but definitely more here than, say, a flanders red. Overall, I feel like I’ve been saying this a lot lately, but this is superb! An excellent, non-standard sour. A

Amazing first impression here, and I’m supes excited for that next bottle… and will need to start begging Jay for more almost immediately.