Pipeworks sez that this beer “celebrates the epic battle between two of the biggest hop-heads of lore.” I think we all know how this matchup turns out: the Ninja clearly defeated the Unicorn so badly that no one even believes the latter ever existed. Not content with the easy answer, I developed a thorough computer simulation, Deadliest Warrior-style*, to pit these two foes together in battle. I won’t bore you with the details, but I assure you that this simulation is comprehensive. Unfortunately, due to budgetary constraints, I could not afford to stage and film a reenactment. After 1000 runs in the simulator, it was close, but the Ninja again won out, thus confirming intuition. That’ll learn me. 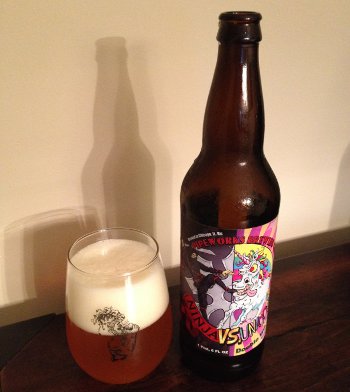 Pipeworks Ninja Vs. Unicorn – Pours a golden brown color with several fingers of fluffy off white head and great retention/lacing. Smells great, sweet citrus and dank pine hop character, some floral notes playing around the edges. Taste starts off sweet, with those dank, piney, resinous hops really asserting themselves quickly, with those citrus and floral notes playing background role, eventually intensifying to a bitter finish. Mouthfeel is highly carbonated, on the upper end of medium bodied, maybe the faintest hint of booze. Overall, I’d easily put this on par with Simcoe Ninja, and while I wish I had a fresher bottle (not that it’s that old, per say), I really enjoyed it. A-

Thus concludes my current stash of Pipeworks beer, but don’t fret, I’m sure I’ll wrangle some more at some point.

* I was somewhat surprised to learn that my comprehensive computer simulation (which consisted of me staring at the ceiling for 5 seconds and just deciding that Ninjas are more badass than Unicorns by simple fiat) was almost as thorough as the Deadliest Warrior’s simulation. “5 years in the making!” they say, and I suppose it was, but not by them – it turns out that the simulation is simply a slightly tweaked version of a video game called Great Battles of Rome.**

** It’s a testament to the relevance of this blog that I’ve spent the majority of this post wanking about a TV show that was cancelled 2 years ago, isn’t it?