As someone who’s been rounding the corner into the sad sort of beer geekery where I cringe at the sight of unrefrigerated IPAs and bemoan the lack of clear bottling dates on bottles and other such pedantry, I have to say that the marketing that surrounds Stone’s Enjoy By series of beers is superb. What’s more, it’s actually relevant! They’re not resurrecting some foul ancient recipe and passing it off as something other than pure gimmickry, they’re actually harping on something appropriate here. I joke about my growing pedantry on the subject, but freshness is actually important.

For the uninitiated, Stone’s Enjoy By is a beer that is brewed not to last (oh shit, I just used a line directly from their marketing, I feel so unclean). Rather than etch a tiny little date on the bottle (that only pedants like myself would seek out), they slap the expiration date in big numbers right on the front of the bottle. In addition, the time window is extremely short – I believe it’s only 35 days from bottling. The idea is that once the date passes, that beer won’t be sold anymore. To do this, Stone appears to limit the size of the batches as well as the distribution area. By all accounts, this stuff sells out pretty quickly wherever it appears. However, they send new batches to a different area each time, so if you can’t get it now (or you missed out the first time around), you will probably get a chance soon enough (there’s a whole social media jamboree about how they choose the next market, but whatevers). My bottle was “Enjoy By 04.01.13”, a gift from a friend (thanks Danur!) procured in the great state of Delaware (we missed out on the Philly batch due to general apathy and laziness).

So I love the concept of this beer, and groupthink indicates that everyone loves this stuff. Alas, I was not quite as taken with it. A fine beer, to be sure, but perhaps it wasn’t fresh enough! 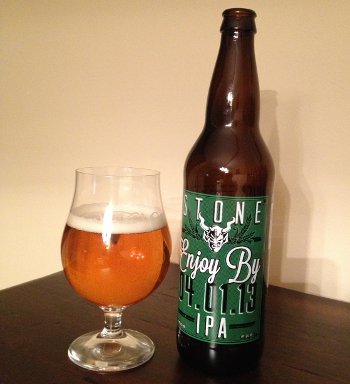 Stone Enjoy By 04.01.13 IPA – Pours a strikingly clear golden color with a finger of white head and plenty of lacing as I drink. Smells of pure hops, pine, lots of citrus, almost plasticky white grapes, a New Zealand hoppy feel – Nelson Sauvin, Motueka, and the like (Update: I was correct! Kinda! Those two hops are there, but also a crapton of other varieties, including some usual suspects and some more exotic stuff). Taste follows the nose and is almost purely driven by the hops. I would be surprised if there were any actual specialty grains used in this. It’s very sweet, but otherwise the actual flavor comes from that piney, fruity citrus plastic from the hops, and the bitterness in the finish manages to counteract that high sweetness factor. I keep describing this as plasticky, which probably sounds worse than it really is, though I don’t think it entirely works either. Mouthfeel is on the upper end of medium bodied, well carbonated but smooth enough. Overall, this is working out, I guess, but it’s not really blowing me away. Not exactly the glowing experience I was hoping for. B

Would perhaps try this again sometime if the opportunity presents itself, just to make sure I’m not crazy about the plasticky character I was picking up. Still love the concept, and the way they exclusively distribute to other areas of the country on a rotating basis.