Evolution Brewing, out of that craft beer mecca of Maryland, has been uniformly impressive when it comes to their series of IPAs. Lot 3 is a very solid single IPA, and Lot 6 doubles things up, a fantastic beer. But what about their other beer? They have a reasonable regular lineup, but I’ve been seeing a lot of interesting one-offs and barrel-aged stuff showing up in shops lately, so I decided to take the plunge. This is described as a Bourbon Barrel Dark Ale (or an American Strong Ale), but really it’s pretty much a stout aged in bourbon barrels. It’s part of their Migration Series, which are released in each season. Let’s see how it fared: 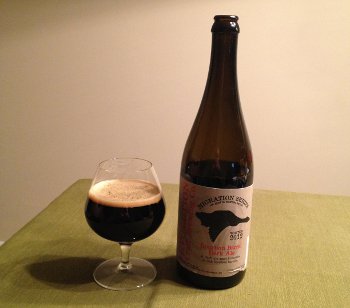 Evolution Bourbon Barrel Dark Ale – Winter Migration 2012 – Pours a deep black color with a finger of light brown head. Smells of roasted malt, a little caramel, and just a faint hint of bourbon and oak. Taste is very sweet, less in the way of roast (though that’s still there) and more in the way of dark chocolate and bourbon, especially in the finish. A little boozy, some caramel, vanilla and oak opening up as it warms. Mouthfeel is smooth, full bodied, a little boozy. Light carbonation, but not undercarbonated. Overall, this is a solid BBA beer, not mind-blowing or anything, but it’s doing its job well enough. B+

Not blown away, but it’s a good showing, for sure, and I’m curious to try out their Menagerie #8, a one-off Belgian Strong Dark aged in Red Wine barrels. And, of course, I’m sure I’ll come back to Lot No6 at some point now that it’s in bottles.