Beer brewing in wine country? Zuh? Alright, so it’s not exactly a new thing, but Sonoma county’s Divine Brewing has its foot in both worlds. Brewer Kevin Robinson has a background in both disciplines and currently splits his time by working at Russian River Brewing during the day (speaking of beer and wine combos) and building his own label at night and on weekends (more info on this story at the linked article). As such, Divine Brewing is a tiny contract-brewing operation, making small batches and packaging only in bottles.

Teufelweizen (thankful that I don’t have to pronounce that and can just write it) is ostensibly a Weizenbock style beer, but Robinson has added a few twists. Primarily fermented with the classic Weihenstephan weizen yeast (which should yield that traditional banana and clove character), Robinson then adds in some wine yeast about halfway through the process (which will help with attenuation and contribute notes of its own). It’s then bottle conditioned with a different strain of yeast, specifically chosen for its ability to age well. The bottles-only packaging was an intentional thing, as Robinson says he “wanted to make beers that can age”, and Teufelweizen, a strong, dark, yeast and malt-focused beer, seems like a promising candidate for cellaring. Rounding out the overlap with wine, the whole thing is packaged in a black wine bottle, caged and corked for good measure.

Jay of Beer Samizdat was kind enough to send me the 2011 vintage in our last trade, so we’ll see how that aging thing works out. 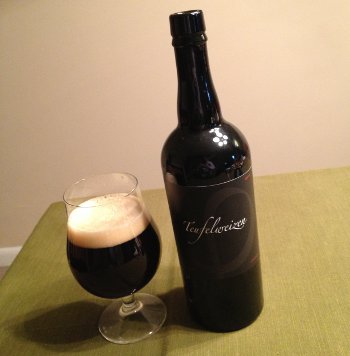 Divine Brewing Teufelweizen (2011) – Pours a dark brown color, very subtle robey tones when pouring, and a couple fingers of tan head. Smells really nice, big malty aromas, wheat, maybe some caramel, and a pronounced fruity character that’s really quite pleasant. Taste starts off very sweet, with a spicy pepper kick and dark chocolate (almost roast, but not quite) notes emerging in the middle, only to fade out into that fruity malt note in the finish. The effect winds up being a chocolate covered fruit (currants?) kinda feel, perhaps sprinkled with some cayenne pepper or something (according to the bottle, perhaps it’s actually Sichuan pepper). Quite unique and interesting. Mouthfeel is smooth and velvety, well carbonated but soft and tight bubbles. Well attenuated, but not super-dry either, which just makes it easier to drink. I wasn’t super surprised that it was 9.2%, but I don’t think I’d have it pegged quite so high either. Overall, really nice beer, complex, unique, and interesting. Oh, and delicious. That too. A-

Quite a nice discovery, would love to try more from this operation sometime… In the meantime, I’ll have to deal with a couple other CA pleasantries sent my way recently, including a Logsdon saison and some fancy looking barleywine.