Back in November, I went to a Dock Street bottle release and loaded up on bottles… and despite some Thanksgiving shenanigans, I haven’t dipped into my stash since then. Well, it’s about time we change that, isn’t it?

This beer, a sessionable saison, is a collaboration between Dock Street Brewer Scott Morrison and Daniel Thiriez, the owner and brewer of a French brewery called, oddly enough, Thiriez. They claim it’s the first US-French collaboration on American soil, and why wouldn’t it be? Insert French joke here.

So how did this “beer of friends” turn out? 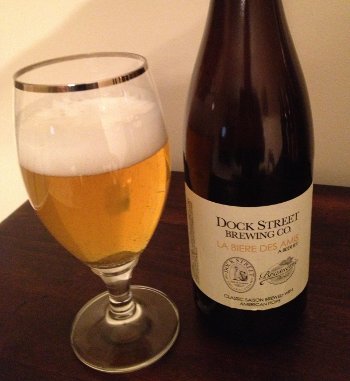 Dock Street and Brasserie Thiriez La Biere Des Amis – Pours a very pretty, light golden yellow color with a couple fingers of fluffy head, great retention, and plenty of lacing. Smells of spicy belgian yeast, pepperery with a nice bready character too. The taste is sweet and spicy, classic Belgian yeast profile here, very well balanced flavors. Mouthfeel is well carbonated, crisp, refreshing, and dry. Clocking in at 4.5% ABV, this is a compulsively drinkable beer. It’s not going to melt anyone’s face, but it might raise an eyebrow here or there, and it’s making a great accompaniment to my sushi dinner tonight. B+