Infection! With my love for barrel aged beers, it was bound to happen sooner or later. Barrels are difficult to sterilize and their rough, permeable surface provides an environment conducive to wild beasties like bacteria or wild yeasts. Of course, brewers like Russian River and Jolly Pumpkin are intentionally trying to sour their beers, so they love to use barrels because of the way they can harbor said beasties. However, this beer, the third in Avery’s barrel aged series, was meant to be an imperial oatmeal stout aged in rum barrels. A few months after release, random reports of the “tot taint” started trickling in, and Adam Avery quickly responded to the BeerAdvocate and RateBeer communities, allowing folks with sour bottles to send the empty back to the brewery and get some sort of compensation. Very big of him, if you ask me. I’m not sure if every bottle is infected, but in Avery’s letter, they mentioned that you should drink it as soon as possible (so, uh, I guess I shouldn’t have drank this 3 years after bottling!) 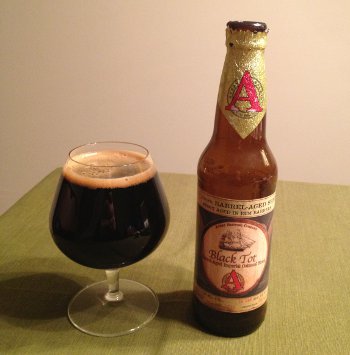 Avery Black Tot – Pours a very dark brown color, almost black, with a finger of light brown head. Smells faintly of that rum barrel aging, along with some fruity malt character that could foretell infection. Tastes… yep, infected. Definite sourness here, perhaps not completely overwhelming, but not exactly pleasant either. Astringent, with some bitterness apparent, not a particularly good combo. Mouthfeel is fine, full bodied, well carbonated, a little too astringent though. Overall, I’d love to have had a non-infected bottle of this stuff. As it is, it’s a slog to get through… D

It’s a shame, as I don’t think I’ve ever had a rum barrel aged beer before, and I’d really like to see how that turns out. Fortunately, I’ve got another, untainted bottle of rum barrel aged beer that came along in the same trade with Dave, so be on the lookout for that one. (I still made out well on the trade overall, so no worries there!) Despite the infection on this beer, I’m still looking forward to hitting up Avery from time to time. I’ve actually got at least one Avery beer aging in the cellar, one of the few, the proud, the purposely aged!