How to put this… Do you ever get that not so fresh feeling? This is a common beer nerd trope, so I won’t harp on it too much, but it’s something I’ve become much more attuned to over the past year or so. It’s especially pernicious when it comes to beers that rely heavily on hops, but it’s hardly limited to IPAs and the like. Take this Russian Imperial Stout from Dock Street, which was aged for a year on Hungarian red wine barrels (which were previously used to age a barleywine), then further aged for about 2 years in the bottle (well, technically, it was first released in 2010, but I bought my bottle in 2012). I really wish I’d gotten to try a fresh bottle of this stuff, because I’m positive that it would have blown me away. As it is, I was pretty well impressed, but it’s definitely showing its age. I mean, you can pretty much tell what you’re in for just by looking at the stuff: 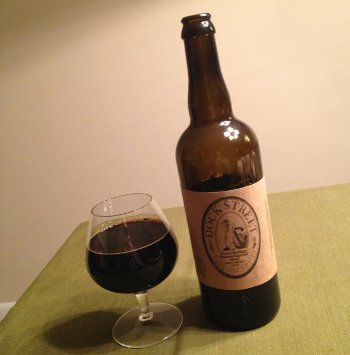 Dock Street Oak Aged Prince Myshkin’s Russian Imperial Stout – Pours a thick, gloopy black color with an almost imperceptible head, just the faintest ring of light brown on the edge of the glass. Smells utterly fantastic, rich caramel, vanilla, and oak. There’s a fruity character too, almost like port. The oak is so nice that if I didn’t know better, I’d think bourbon was involved. Tastes follows suit with rich caramel, a less prominent but still present vanilla and oak, some dark chocolate, and a trace of bitter roasted malt in the finish. Alas, its age comes out in the mouthfeel, which is definitely way too low on the carbonation, but otherwise full bodied, thick, and chewy. It was certainly drinkable, and I put down the whole 750 without much of a thought, but if this were a bit more carbonated, it would have been sublime. As it is, it feels thinner than it should. For now, I’ll hit it with a B+, though it was probably way up in the A range when fresh.

Least you think I’m just wanking about this old beer crap, I was reminded to hit up my Dock Street stash last week when Rich on Beer noted that this BA Myshkin was definitely getting a little long in the tooth. And it looks like his beer didn’t have quite the carbonation problems mine did – his picture even displays some semblance of head! That or Rich is more tolerant of low carbonation in his beer, which is certainly possible. I’ve noticed this is something that bothers me more than most. Anywho, I’ve actually got a few other Dock Street beers in the cellar, including the 2009 barleywine that was in these Pinot Noir barrels before Myshkin and some funky sours too, though none are in the immediate pipeline.