I don’t know why, but last year, I underestimated how hard it would be to find some of this beer and ended up missing out on its hoppy goodness. Well, not so this year. I’ve been keeping my eye out, and last week, I spied some at a local establishment and finally made my acquaintance with this beloved beer. I would love to get my hands on some bottles of the stuff, but things are a little rough in PA, where you mostly have to buy beer by the case and thus this stuff sells out pretty quickly. Guy at the bar mentioned that he’s been on the waiting list at his local distributor for two years… and he still wasn’t sure if he’d get the case this year. But I hear rumors of more stuff coming later in February, so maybe I’ll snag a few bottles then… But for now, I’ll just have to deal with it on tap: 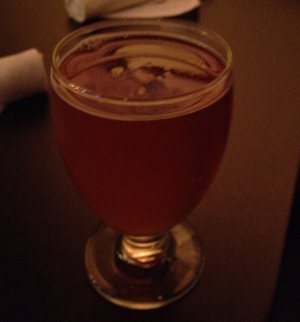 (Apologies for the craptacular picture. It was dark!)

Bell’s Hopslam Ale – Nice clear golden color with about a finger of head. This might sound obvious, but it’s quite hoppy. Tons of juicy citrus, a little pine, maybe some floral aromas too. Tastes fantastic – very sweet, nice citrus and pine hop flavors, with a well matched bitterness emerging in the middle, hitting full force in finsh. It’s a sweet beer, but the finish is dry and bitter enough that it never feels cloying. It’s apparently brewed with honey, which would help explain some of that dryness… Extremely well balanced. Mouthfeel is smooth, maybe a little heavy, but still very easy to drink. The alcohol is well hidden too, though maybe just a hint of warming if you drink quickly (unsurprising given the ). Overall, fantastic beer. I can see what all the fuss is about… and I want more! A

I do hope I can get me a few bottles of the stuff, but I have to admit, the stories about people stalking this beer are a bit much. If I can find some, great, but I ain’t going crazy trying to get my hands on the stuff. Ditto for Pliny the Younger, which