In case it’s not entirely obvious, I’m a complete sucker for barrel aged beers. I don’t talk about it much on this blog, but I’m also a fan of Scotch. So beers aged in Scotch casks are doubly appealing to me. Enter Brewdog’s Storm, an 8% IPA aged in Islay whisky casks. For the non-Scotch nerds among my readers*, Islay is a small island off the Western coast of Scotland that is the home of 8 active distilleries. There are, of course, lots of variations between each distillery, but one of the central characteristics of Islay Scotch is a smoky character derived from peat (think Laphroaig, Lagavulin, and Ardbeg, though there are less peaty varieties of Islay Scotch). So when someone says they’re aging a beer in Islay whisky casks, you should expect to find the smoky, peaty, almost medicinal flavors of the scotch somewhere in the taste.

Unfortunately, somewhere along the way, something went dreadfully wrong with this beer, perhaps compounded by a mysterious labeling snafu. 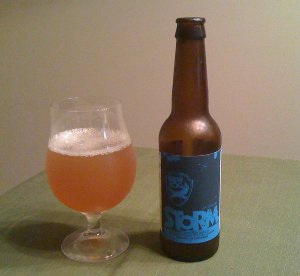 Brewdog Storm – Pours a hazy golden orange color with almost no head, and what was there had big bubbles (i.e. it was mostly just the way I poured). The nose is full of Scotch whisky, peat smoke and not much else. There are some subtle beery aromas around if you really look for it, but they are faint. The taste is extremely smoky, with some sweetness and not much in the way of bitterness (which really only comes out in the aftertaste, mixed in with some additional peatiness). There are maybe some interesting complexities in the taste, but it’s also not particularly well balanced. Mouthfeel is thin, definitely too light on the carbonation. Overall, it’s completely overpowered by the peat smoke and scotch aromas and flavors. I like scotch (because I’m manly), so I thought maybe this might be ok when I started the beer, but it was ultimately not a good experience. The base beer was apparently an 8% IPA, but it absolutely does not stand up to the scotch at all. Also, as discussed recently, aging an IPA is a tricky proposition. Hop flavors tend to fade with time, which definitely seems to be the case here (especially given that it may be an older bottle than I initially thought, see below) – I really don’t get any hop aromas or flavors, save a little bitterness in the finish. It’s an interesting idea, but there are some major balance issues here and it’s really not working for me. A tentative D – given the nerdy mystery below, I’m not sure what to make of this. Perhaps a “fresh” bottle would be better.

Hmm, I looked a little closer at my bottle and I noticed that the batch and date details were on a sticker. I carefully peeled it off, revealing: 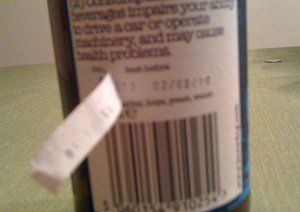 Sorry about the craptacular picture (you can click it to see a bigger, blurrier version if you like), my old phone isn’t quite up to the task, but what the hell? It says best before 2/2/10 on the original label. No wonder it’s so bad! I suppose it could have just been a labeling mistake (which has been known to happen) that was band-aided with the sticker thingy… or it could be a really old bottle (which might explain why this didn’t taste particularly fresh) that was re-labeled in order to trick people into thinking it was “fresh”. I don’t know what to make of this. Anyone ever run into that sort of thing?

I’m scratching my head over this. There are numerous points of contact that could be the source of the problem, so who knows where the fault lies. If there actually is a problem. It seems the nerds on Beer Advocate were also not very taken with this beer, giving it a C (for reference, PBR gets a C+). Even if it is just a bad beer, I’m still not soured on Brewdog. I have a few Devine Rebels (which, granted, were a collaboration with beer-god Mikkeller) aging right now, and another of their Scotch barrel aged beers, though Paradox uses a stout as its base beer, so I’m hoping that will work better.

* Actually, I estimate that at least 33% of the people likely reading this are big Scotch fans and probably know a lot more about Islay whisky than I do.