This is one of Sly Fox’s flagship brews, and one of the more popular local pilsners… but can it hold up to Victory’s Prima Pils? I have to admit that the pilsener style isn’t one of my favorites, though they sometimes do hit the spot. 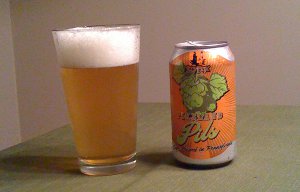 Sly Fox Pikeland Pils – Pours a clear golden yellow color with tons of loose, large-bubbled head. It’s got that distinct earthy, floral hop aroma (Saaz hops?) that I associate with pilseners, which follows through to the taste. The taste is pretty straightforward stuff, pale malts with the light hoppy bitterness that characterizes the pilsener style. Mouthfeel is well carbonated but very light and easy to drink. Overall, maybe better than your average pilsener, but again, this isn’t really my favorite style and it certainly hasn’t unseated Prima Pils. B-

Sly Fox is still one of the more interesting local brewpubs, and I look forward to trying more of their beer. I’ve even got a couple cans of their IPA ready to go…