Today was beer club! Due to various factors, the variety of beer was somewhat limited this month, but there was still plenty of merriment to be had, and when we got to the BYOB restaurant, we saw this sign out front: 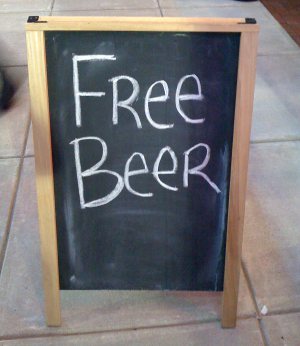 Certainly a good omen! Apparently the restaurant had some Lager, but since they had no liquor license, they were just giving it away for free. Score! There was no real theme for the month, but we did end up with about 7 different beers (not including the free Yuengling) as well as some wine, cider and homemade Limoncello (unpictured, but it was very sweet and incredibly alcoholic!) Here’s a quick picture of what we had: 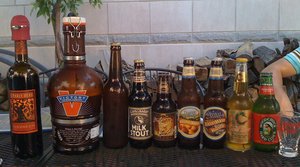 As usual, tasting conditions were less than ideal, so take the following with a grain of salt (beers listed below are basically in order from left to right in the picture, not necessarily the order in which we drank them):

Despite the fact that I’d had/reviewed half these beers before, I think it was another successful outing for the beer club. It’s looking like we might get a bonus beer club meet at The Whip in addition to our normal meetup next month. Score!