Yes, “research” into milk stouts continues. It occurs to me that I kinda rushed into the whole thing yesterday, so just to back up a bit, I want to talk about what actually constitutes a milk stout. Given that phrase, one might expect the rather disgusting addition of actual milk somewhere in the brewing process, but fortunately, that is not the case (though the lactose intolerant might still want to steer clear of these beers). Without getting into too much detail about how beer is brewed, I’ll say that beer basically starts out as sugar water. Then you add yeast, which eats the sugar and converts it into alcohol, carbon dioxide, and various flavor compounds. Now, yeast typically doesn’t eat all the sugar – typically it only consumes around 65-85%. This is why beer is still sweet enough that you need to add hops (which cuts the sweetness with bitterness). One of the implications of this process is that the more sugar you put into the process, the more alcohol you get. You also end up with a lot of residual sugars. This is why a lot of imperialized beers end up being really sweet.

On the other side of the scale, when you don’t put that much sugar into the process, you end up with a beer that has less alcohol, but also less residual sugars and thus less body. One way to make up for that is to add unfermentable sugars to the brew, thus increasing the body and the sweetness without increasing the alcohol. As it turns out, lactose (which is basically the sugar in milk) is unfermentable, so it’s often used to add body to beer. Hence the phrase Milk Stout, though the style is also referred to as cream stout or just sweet stout (and to be fair, not all sweet stouts necessarily use lactose – other unfermentable sugars can be used as well). Yesterday’s beer was probably a horrible example of the style, but today’s example is much more typical: 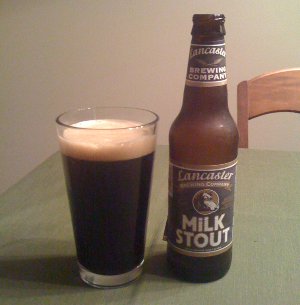 Lancaster Milk Stout – A semi-local brew from Lancaster, PA, this one is probably the brewery’s most popular beer. Pours a very dark brown color, with a finger of tightly beaded head. The smell is full of roastiness, and maybe some chocolate or coffee. That roastiness hits at the beginning of the taste, but it quickly yields to a well matched sweetness followed by the return of roastiness and maybe a little hop bitterness in the finish. There’s maybe a hint of coffee in the roastiness as well, but probably a bit more chocolate, though neither flavor is dominant. Indeed, the flavors here are very well matched. Medium bodied and well carbonated, it still goes down smooth and is pretty easy to drink. Overall, a really nice beer. B+

Quite enjoyable, and I think I could probably safely order the Northern Brewer kit. On the other hand, it might be worth checking in with the local homebrew shop and seeing if maybe he has some recommendations for me… Plus, it might be time to upgrade my equipment as well. Perhaps invest in some glass carboys, and so on.