So now that I’m totally over 2010 movies, I’ve started hitting up 2011. This past weekend, I saw Hall Pass, which had a lot of funny moments amidst a rather trite plot and some unnecessarily scatalogical humor. Among the raunchy-movies-with-a-heart genre, it was actually decent and worth a watch if that’s your thing. Far more interesting, though, was the movie I had some beers whilst watching – Rubber. You probably haven’t heard of this, but it’s a really profoundly weird film. It’s about a tire. A killer tire. Named Bob. The grand majority of the film is just watching a tire roll around on screen, occasionally stopping to make people’s head explode (my assumption is that Bob the Tire doesn’t like that we have enslaved his brethren for use on our cars, but that is only implied). There’s a lot more to it than that, of course. Bob seems to have fallen in love. And there’s an audience watching everything. And some cops trying to catch Bob. Yeah, so really weird. It’s a short film and kinda artsy-fartsy, but I loved it. It’s available now on a lot of Cable On-Demand services (I saw it on Comcast), and my understanding is that there will be a short theatrical release in early April.

As for the beers I drank whilst watching, it was another night of IPAs (this is the 4th IPA double feature – more than any other style): 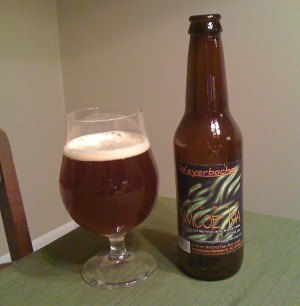 Weyerbacher Double Simcoe IPA: Yet another “Big Beer” from Weyerbacher’s variety pack, this one actually has the best rating on Beer Advocate. The name of the beer is referring to the liberal use Simcoe hops during brewing. Simcoe has high levels of alpha acid, but it also has a very fruity aroma and taste component that makes the bitterness a little less aggressive than you may think (so says my homebrew book here, though I think Weyerbacher’s beer also kinda confirms that). If I ever end up homebrewing an IPA, I might try getting my hands on some of these. Anyway, the beer pours a cloudy darkish brown color with about a finger of head that dissapates rapidly and doesn’t leave much in the way of lacing. Smells delicious! Mostly fruity citrus hops and an almost candi-sweetness in the nose, with maybe a hint of earthiness or pine present. Very sweet start (maybe a little fruitiness), with a bitter hops kick later in the taste and the finish. Some sticky booziness comes into the aftertaste as well, but it’s reasonably well balanced with the rest of the flavors (though I think you could also argue that this is perhaps a bit too strong). Mouthfeel is smooth, with just enough carbonation to offset the booziness (though again, you may be able to argue that it’s not entirely successful in hiding the booze). All in all, quite an enjoyable beer and well worth a try for fans of the style. It’s probably my favorite of Weyerbacher’s offerings (that I’ve tried). B+ 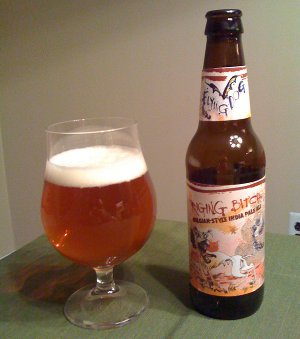 Flying Dog Raging Bitch Belgian Style IPA: I’ve enjoyed Flying Dog’s beers without ever being particularly impressed, but then, I’ve only ever really had their “normal” brews. This particular beer is one of their bigger beers, and it’s also got a spot in the BA top 100. It pours a clear, light reddish brown (copper!) color with a couple fingers of head. Smells sweet, spicy and citrusy with a little bit of bready Belgian yeast and not much in the way of hops. The taste starts sweet with some spiciness in the middle and a crisp, bitter finish. There are roasted flavors in the taste as well, but not like a roasty stout. Is that pepper? It’s a familiar taste, something I normally associate with beers like Hoegaarden and Chimay Red, but it’s not as overpowering here as it is in the other beers – perhaps due to the strong hoppy bitterness. It’s really quite complex, I keep discovering new flavors. As I drink more, the bitterness becomes more prominent, the peppery flavors start to emerge more and the finish becomes more dry. Mouthfeel is a bit harsher than the Weyerbacher, but still pretty good. A really well crafted and interesting beer, though I’m not sure I actually like it. It’s amazingly complex, but I have to admit that it’s not really my thing. It’s something I’d like to try again sometime, and I can see why it’s rated so highly, but something about the way it’s spiced just isn’t working for me. B

Well that just about covers it. Look for some more double features soon, neither of which will be IPAs (I promise!)