See what I did there? Sorry, I can’t resist beer puns. The numeric Trappist beer style conventions are a bit odd as there really isn’t much consistency between them or a real, objective measure. In general a dubbel is stronger than your average beer, and a tripel is stronger than a dubbel, and a quadrupel is stronger than a tripel. But then, it’s easy to find examples of each that are stronger or lighter than expected. In any case, the dubbel is a really interesting style. It’s very strong, but not too strong. It’s usually a dark color beer, but it doesn’t usually feature the roasty flavors of stouts and porters. As such, it makes an excellent gateway beer for folks who don’t think they like “dark” beers. I’ve been making my way through a variety pack of St. Bernardus beers, and of course, there are two different dubbel style beers to be had. St. Bernardus isn’t technically a “Trappist” brewery since the beer isn’t brewed within the walls of their Trappist Monastery, but in general, their beers are every bit as good. So here are their two dubbels: 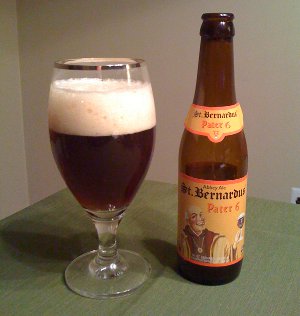 St. Bernardus Pater 6 – The word “Pater” is latin for “father”, which seems rather appropriate (if not especially descriptive) for a beer directed by Trappist monks. It pours a dark red/brown color with a big head featuring lots of bigger bubbles and some lacing as I drink. Smells of dark fruit and bready Belgian yeast, with some spiciness and maybe even pepper as well. Taste is fruity, sweet, and spicy. Very well balanced and surprisingly easy to drink (perhaps due to the relatively low ABV). Lots of carbonation and a medium/full body. As dubbels go, this is a bit light, but still fantastic. Perhaps the Belgian version of a session beer! Of course, at 6.7% ABV, that’s way too high, but still manageable. A- 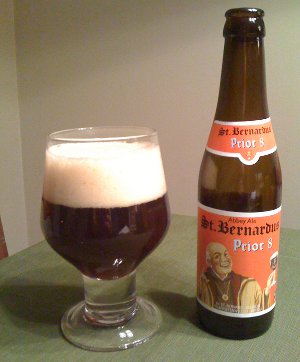 St. Bernardus Prior 8 – A “Prior” is also a term meaning “father”, but it is generally considered to be just a step below Abbot in the hierarchy (which makes sense, considering that the next beer up in St. Bernardus’ lineup is the Abt 12, a Quadrupel that I actually didn’t like as much as either of the two beers in this post). Pours a deeper, darker brown color, with only a hint of red. Again, big head with lots of bubbles and some lacing as I drink. Smell is similar, but with a hint of additional caramel. Taste is also on the similar side, but this is more complex and intense. That being said, it’s still quite drinkable. Well balanced, lots of carbonation, maybe a bit of a fuller body. As it warms, the carbonation settles down a bit, making for a smoother, boozier feel. Definitely one of my favorite dubbels, though not quite at the very top of the list. A

Well, what do you know? It turns out that these are technically the first dubbel-style beers I’ve reviewed on this blog. More are certainly coming! I’ve also got two St. Bernardus beers left from my variety pack, both tripels, so look for another double feature post soon.