I’m still catching up on 2010 movies, and this weekend’s double feature was the relatively interesting duo of Valhalla Rising and Triangle. Now, I have no idea what Valhalla Rising is supposed to be about, but it’s a beautiful, if surprisingly violent film featuring a one-eyed, mute Mads Mikkelsen. I’m not sure what to make of Nicolas Winding Refn, but the dude knows how to photograph stuff and and is always interesting, if perhaps a bit too artsy-fartsy (then again, this is a movie where someone armed only with an old arrowhead kills 5 people, in one case using the weapon to graphically disembowel an enemy that’s tied up – hardly the usual artsy-fartsy style). Triangle is more conventionally filmed, but in the end, it’s also pretty damn messed up. I will leave it at that for now, though I will say that fans of Nacho Vigalondo’s (second best director name ever) Timecrimes would probably enjoy this movie (it’s not quite a time-travel story, but there’s a sorta recursion going on that will be familiar to time-travel fans). I’m on the fence as to whether Triangle will make the top 10 (i.e. it might be nice to have a film on my top 10 that’s a little more obscure than the usual suspects), but I did enjoy it quite a bit.

Speaking of enjoyment, I took the opportunity to check out two recent IPA purchases. Interestingly, this marks the third occasion that I’ve done an IPA double feature, which is interesting. I seem to like IPAs better when drinking different varieties together. Go figure. 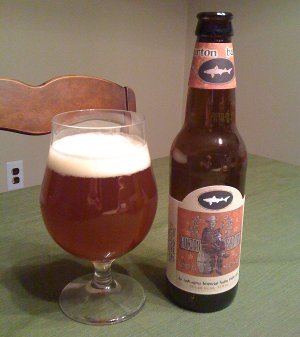 Dogfish Head Burton Baton: There’s always a story behind the Dognfish Head beers, and this one is no exception, though the story isn’t on their website (at least, not in the obvious place for it). I had to resort to an interview with Sam Calagione to find the origins of this beer. It’s an homage to an old IPA beer brewed in the 1950s and 1960s by an east coast brewery called Ballantine which was called Burton Ale, itself a tribute to the English town of Burton (apparently a big brewing town – home of Bass ale, among others). The original Burton ale was a blend of different batches that was aged in wood for complexity, and thus so is Dogfish Head’s beer. The “baton” part of it’s name is not directly explained, but then, it probably doesn’t need to be – there are several meanings that fit here, so I’ll leave it at that.

It pours a nice amber orange color with about a finger of head and some lacing as I drank. Smells fantastic. Clean and crisp, with some floral hops, maybe some pine, and a little bit of citrus. Taste starts of smooth and sweet, followed by a bite in the bready middle as the bitter hops and alcohol hit, and the finish is surprisingly sweet and sticky. There is some booziness here, which is to be expected from such a high ABV beer, but it’s not overpowering or cloying. The sticky finish makes this a good sipping beer, something you need to let linger a bit. Interestingly, some of that hoppy bitterness returns. As it warms, things seem to mellow a bit, which makes it even more drinkable. It reminds me a bit of Dogfish Head’s 90 Minute IPA, but it’s a little looser and wilder than that (exceptional) beer. I’m rating it slightly lower than the 90 Minute, but perhaps another double feature is in order to really determine the winner… In any case, it’s another excellent brew from Dogfish Head. A-

Palate cleansed with some Buffalo wings. Yeah, I know, not exactly great for the palate, but wings and IPAs go together well. 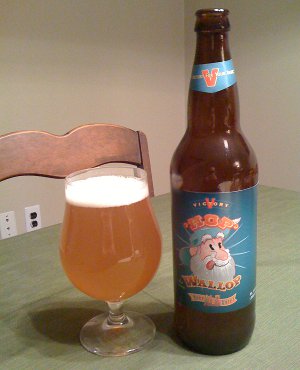 Victory Hop Wallop: Interestingly, the label on this one also features a story about the legend of Horace “hop” Wallop.

Horace ‘Hop’ Wallop headed west a broken man. For in the city of Blues a Miss LuLu Bell Lager had left him thirsting for more. Drawn by wild tales of riches to be had in the gold mines, Hop pressed on westward. His last nickel spent on a prospecting pan, Hop’s hunger got the best of him. Two fistfuls of barely and three of some wild and wayward hops tossed in a pan with some clear water was to be his meal. But sleep overcame him and he later awoke to a bubbling cacophonous concoction. Overjoyed with the beautiful ale he had made, Hop realized the secret of the green gold he had discovered in those fresh hops. Celebrated far and wide, Hop Wallop lives on this vivid ale with his words, “Hoppyness is Happiness”. Enjoy!

I have no idea if there really was a gold-prospector named Horace Wallop, nor do I know if he accidentally made some IPA wort with his prospecting pan (nor if he looks like the cartoon on the typically well designed label), but it’s a wonderful story nonetheless. It pours a lighter, hazy yellow/gold color. Not a lot of head on it. Smells very different. Some sweet malty smells with the floral hops almost buried, but a lot of citrus coming through (I initially got the impression of oranges). Very smooth mouthfeel, with a much smaller bite and a dry, bitter finish. Not as much carbonation as the Burton Baton, but I wouldn’t say it’s bad. A very different taste, maybe a bit less complex, but still very good. There’s something distinctive about it that I can’t quite place, but it’s enjoyable. Graprefruit, maybe? There is a tartness to it, and when combined with the citrus, I guess that does mean Grapefruit. (Looking at BA, it seems that my Grapefruit hypothesis is probably correct and is probably what I was smelling as well). It’s a really fantastic beer. Very different from the Burton Baton, but I think I enjoyed it just as much. A-

Another week, another IPA double feature. I expect another one soon as Nugget Nectar and some other hoppy seasonals hit the shelves.