Last week, I mentioned that I had lucked into a New Years themed beer, and this is the one. The name Avec Les Bons Voeux de la Brasserie Dupont translates to “With the best wishes of the Dupont Brewery” and was originally brewed in very small batches and given to select clients as a New Years gift. It has since become a regular Winter seasonal for Dupont, but it’s apparently still somewhat rare to find. Lucky for me, Wegmans (of all places) had a few of these available, and while I recognized the brewery, I didn’t realize at the time that it was somewhat rare – once I realized what it was, they were sold out.

This brewery is known mostly for Saison Dupont and this New Years brew is along similar lines, only stronger. The saison style of beer isn’t exactly winteriffic, but then, I suppose there’s a champagne-like quality to the beer that makes it appropriate for New Years (that might be a bit of a stretch, but it’s nowhere near the stretch of, say, Sierra Nevada Celebration). 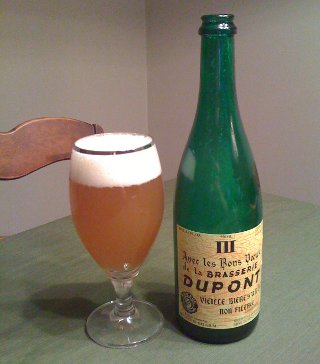 For what it’s worth, the label has a big roman numeral “III” on it, but I don’t know what that means. I thought maybe it was a batch number or something, but apparently lots of people have seen that in years past, so either this is an old bottle (doubtful) or it signifies something else. Also, the cork had “2.010” on it, which I take to mean it was brewed in 2010. Anyway, it pours a light, yellowish brown, almost orange color, with a few fingers of light, fluffy head and plenty of lacing as I drink. An unfiltered beer, it’s very hazy, with lots of sediment and visible carbonation. The smell is musty and sweet, with some citrus and Belgian yeasty spiciness apparent. Taste is spicy (pepper and clove) and quite sweet, with a tiny bit of a dry, tart finish. The carbonation and spiciness lends an almost harsh mouthfeel, but I like that sort of thing. I was surprised to see how high the ABV was on this… there’s no real booziness apparent in the nose or taste – it’s quite well hidden by the powerful flavor profile. Actually, it gets smoother and almost velvety as it warms up, which is probably the alcohol’s doing and the chief difference between the traditional Saison Dupoint and this one. Saison Dupoint is one of my favorites and this is essentially a stronger version of that, so it gets the same grade. A