A couple years ago, I acquired a bottle of Great Divide’s Barrel Aged Hibernation in a LIF. It was quite nice, but the barrel component wasn’t quite as integrated as I expected. This could be because the bottle was nearly 2 years old or it could be that the Stranahan’s barrels they used don’t really live up to the more common bourbon barrel approach. The former could be addressed by snagging a fresh bottle of BA Hibernation (which I see are circulating in the area right now), but the latter will be more of a challenge since Stranahan’s is relatively small, there aren’t that many breweries that use their barrels, and then there’s the fact that they have asked brewers not to disclose their name on labels anymore. Also, the nature of a small distillery like Stranahan’s can lead to inconsistency, which could also translate to their barrels… I’m not an inconsistency hater and can even find it charming in some instances, but that doesn’t make a true miss any less annoying!

All that being said, it’s my understanding that Great Divide does still use Stranahan’s for their barrel program, and when I saw this barrel aged barleywine (for 12 months, no less), I thought I’d give it a shot. I’m happy to report that this worked out better than the old ale (though it appears some folks have gotten infected bottles – mine was not, so I don’t know how prevalent any of those issues was): 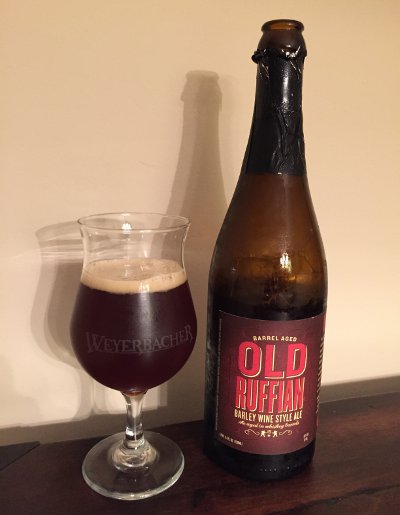 Great Divide Barrel Aged Old Ruffian – Pours a dark, murky amber brown color with a finger of off white had that sticks around for a bit. Smells of dark fruits, raisins, plums, with some caramel and toffee and hints of whiskey in the background. Taste goes to a similar place, rum soaked raisins and plums, hints of slightly boozy oak and whiskey, and a malt backbone of caramel and toffee, finishing with that touch of whiskey and vanilla. As it warms, it gets a bit deeper and the whiskey comes out a bit more. Mouthfeel is full bodied, tightly carbonated, with a moderate amount of richness from the barrel aging, silky smooth, with enough alcohol heat in the finish to keep it a sipper. Overall, very well executed bourbon barrel barleywine, quite a treat. A-

This was very nice and makes me want to go out and grab another BA Hibernation, though I really shouldn’t, as I’m drowning in good beer over here. I know, woe is me, but I’ve got to drink down my cellar a bit and oh, it looks like I’ve got a trip to Vermont on the near horizon, so this is going to be rough. For certain values of “rough”.

In the swishy world of beer trading, there are many ways to play. There’s the obvious 1 on 1 trades, I’ve already covered the BIF (kinda like Secret Santa, but with beer and without the holidays), and now we come to the LIF, which stands for Lottery It Forward. The idea is that someone who has had some good fortune will pay it forward by giving away a beer or six from their cellar. Most LIFs consist of a simple challenge (the first person to answer my obscure question wins!) or straightforward lottery, but lately, there’s been a lot of charity LIFs where someone will keep track of donations, then enter you into a lottery drawing based on how much you donate (usually 1 entry for every $10 donated).

Believe it or not, I’ve actually won two of these. The first was for a charity, and my prize was… a Tired Hands growler! Because I visit the brewery practically every week, the organizer was supremely apologetic and since all the other winners had been notified, I just asked him to pick a new name (gotta share that Tired Hands love). It seems karma saw fit to make me a winner in another LIF, so here I am with a box of 6 pretty great beers. Lucky (and grateful), I am.

This one comes from Colorado, which has quite the booze scene. Not just craft beery type stuff either. For this beer, Great Divide took one of their stable beers (perhaps amped up a bit), an old ale style, and aged it in Stranahan’s Colorado Whiskey barrels. Near as I can tell, Stranahan’s is a unique little “microdistillery”. Their mash bill is comprised of four different types of barley, so it’s not Bourbon. Indeed, the mash bill seems kinda like Scotch, but it’s all aged in new American oak and it’s obviously not a single malt either. So yeah, unique. And apparently fun. Their labels all have a personal note from the person bottling it, usually a song or quote or something like that – this guy got a bottle that says “Listening to Xmas Carols”. That’s a nice touch. So let’s see how these barrels treated this beer, eh? 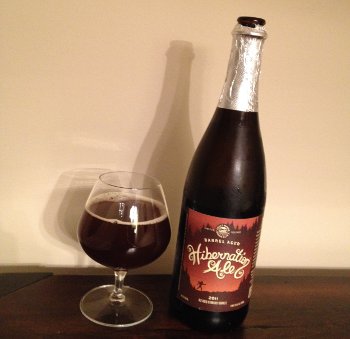 Great Divide Barrel Aged Hibernation Ale – Pours a deep, dark brown color with half a finger of quickly fading off white head. Smells strongly of rich, fruity booze, lots of caramel with a strong malt backbone, and a little bit of that whisky barrel character. Taste has plenty of caramel and some of that fruity malt and booze, with the whisky barrel character making itself known, but not super assertively, towards the finish. Mouthfeel is surprisingly thin for such a big beer. Medium bodied, light carbonation (but nothing inappropriate), with a leading richness that quickly thins out (it’s not watery or anything, but it’s a lot thinner than you’d expect a 12.4% ABV monster to be). Overall, this is a really solid beer, but lacking in the richness and whiskey character that I was expecting. Is this a function of its age? Excellent question, I have no idea! I’m really happy I got to try this though, and despite my expectations of a richer brew, it is damn good… so I’ll give it a B+ and that will be that.

Quite a nice one, and I’m really looking forward to the rest of my box, which includes some obscure Bruery stuff and a couple of those .rar Crooked Stave releases. Score. And this beer makes me want to seek out some more Great Divide, a brewery I haven’t had much of lately, though I guess I’ve had a couple Yeti variants over the past year or so… but can you really have enough Yeti? I think not.

Great Divide’s Yeti Imperial Stout is a hugely popular beer, but it’s one that never really connected with me (I gave it a B). I wouldn’t call it bad, but perhaps a bit overrated. Well, Great Divide has taken this beer and used it as a chance to experiment. There’s a version with Brett, a version with Belgian yeast, and several oak aged varieties – including this one, aged on oak chips with cocoa nibs (apparently there’s a “hint of cayenne” as well, though I certainly didn’t pick up on that). The regular Yeti sorta emphasizes the things I don’t particularly love about stouts, but this treatment – less of the bitter hops and roasted coffee flavors, more in the way of chocolate and vanilla character – is right up my alley: 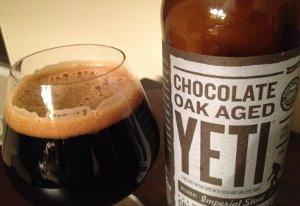 Great Divide Chocolate Oak Aged Yeti – Pours a thick black color with a finger or so of brown head. Aroma is full of roasted malts and, yes, chocolate. Taste is very sweet, with less of the roastiness than I was expecting (though it’s still there), a little bitter dark chocolate, and a very nice vanilla oak character, along with a heaping helping of booze. The finish is relatively dry and bitter, with that bitterness lingering into the aftertaste. I remember the regular Yeti being very bitter too, but this version seems to have a more pleasing bitterness. Mouthfeel is full bodied and boozy, a little bit of alcohol burn, but it works quite well. Overall, I’m much happier with this than I was with the regular yeti. I actually kinda love it, which was surprising… A

Great Divide has a bunch of these oak aged Yetis, and I’d like to try some of the other ones… The Bourbon Barrel aged version sounds particularly enticing, though the Espresso Oak Aged one might not be my thing…

As you may have noticed in my last review, I’ve got a number of reviews that have been sitting in the queue for a long time. I’ve been pretty good about keeping up with recent drinking, but I just haven’t gotten around to some of those older reviews, so I figured I’d just do a quick recap now…

Well, that just about covers it. I have more details about these tucked away somewhere, but for now, this will have to do. Of course, this doesn’t completely catch me up on reviews, but now the unwritten ones are from the past couple weeks, which is certainly more manageable.

It’s summer! On a recent beer run, I stocked up on various wheat beers and whatnot, and when I saw this particular beer, I was intrigued. Most wheat beers tend to be relatively light, crisp and refreshing. As such, they tend to be somewhat low in alcohol and a little thin in terms of body (but, you know, in a good way). So the concept of a souped-up Belgian-style wit beer sounded intriguing to me. 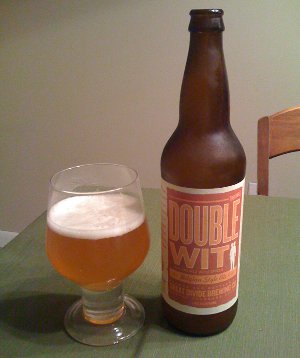 Great Divide Double Wit – Pours a cloudy gold color with a finger of bubbly white head. Aroma is fruity and spicy. It’s definitely a unique aroma, not like anything I can think of, though there similarities. The taste starts off very sweet and bready, with some spiciness thrown in there (apparently coriander and orange peel). There’s some fruitiness apparent as well, but I can’t quite pick out the specific flavors. The finish is just a bit sticky with booze – the alcohol is noticeable and makes for something of a weird aftertaste. The body is strange. It seems to start out full bodied, but then it thins considerably by the finish. This is something I associate with wheat beers, but it’s not usually this prominent (no doubt a result of the high alcohol) and it doesn’t entirely work. I can’t quite decide how much I like it. It’s certainly an interesting brew, but it’s poorly balanced and definitely not one of my favorites. I’ll give it a B-.

Strangely, Great Divide has nothing about this beer on their website. Also, I have no idea why there is a two headed… monster? Kid? on the label (presumably a play on the “double” nature of the beer, but still), and yet, I rather like it and want to watch a movie documenting its rampaging exploits. Unfortunately, you can’t drink labels.