I enjoy when a brewery starts playing around with using different barrel treatments on the same base beer. The differences are sometimes subtle, but they do emerge in a horizontal tasting. When Gigantic brewing started releasing variants of their most excellent Massive! barleywine, I sought out a couple to see how they’d fare.

Barrel diversity is great, but I’ve never had a beer aged in Port barrels that I loved. Now, I do enjoy a good Port wine, but something about the Port barrel-aged beers I’ve had just never worked for me. In fairness, I haven’t had some of the heavy hitters of the category. I’m looking at you, Damon. Likewise, while I enjoy Rye whiskey from time to time, I often end up feeling like a Rye barrel-aged beer is too similar to Bourbon barrels (and usually not as good).

So I’m happy to report that these variants are awesome. Maybe even better than their Bourbon barrel-aged counterpart. I don’t know what sorcery the Gigantic brewers practiced, but it worked:

Gigantic Massive! Port Barrel-Aged – Pours a turbid, muddy brown color with a solid finger of off white head that doesn’t stick around very long. Smells great, the base caramelized malt character shines through, the oak makes itself known, but the port is lurking more in the background. The taste is all rich caramelized fruit, the port wine is very well integrated with the base here, caramel, toffee, fruit, a little booze. Mouthfeel is still rich and full bodied, maybe not quite as much in the way of booze, but still plenty of alcohol heat, making this a nice little sipper. Overall, this is fantastic. It is, by far, the best Port barrel aged beer I’ve ever had, and at least as good as the standard Bourbon barrel version if not better. A

Gigantic Massive! Rye Barrel-Aged – This appears similar, but comports itself much more like the bourbon barrel aged version, which is about what you’d expect. I’m not having them side-by-side, so I can maybe talk myself into this having more of a spicy rye note and these variants do seem to be a bit more balanced or integrated… whatever that means… Look, this is a great beer, much like the regular Bourbon version, and I’m really enjoying it. Would highly recommend checking these variants out. It seems like they’ve done a great job with them, but this Rye variant isn’t as distinctive as the Port version, so if you have a choice, I’d go for the Port before this… This is still great, though! A-

These were both phenomenal and if you see these Gigantic Massive! variants out in the wild, I would highly recommend checking them out. I’d certainly love to try some of the other variants, notably the Cognac (which I find works well with barleywine). Maybe Gigantic even managed to tame the Scotch barrels (or, more likely, they chose a non-Islay/non-peated scotch barrel). Maple barrels are nice, but do tend towards the overly sweet. The Mezcal variant is the only one that seems like a bad idea. But it gets good ratings, so what do I know? I certainly wouldn’t turn it down.

The color of beer mostly has to do with how malt is produced. Barley is soaked in water, allowing it to germinate, and then heat is applied to stop germination. The higher the heat, the darker the malt. The darker the malt, duh, the darker the resulting beer. Pale malts still represent most of the malt used. You don’t need a ton of darker malt to make the beer dark, but pale malt by itself isn’t especially tasty. The flavors of pale beers come from hops or maybe the yeast used (or maybe they’ve got an intentionally muted flavor profile.)

Obviously there are other adjuncts that can change the color of beer (i.e brightly colored fruit like cherries, dark sugars, etc…), but another thing that could be done is an excessively long boil time. Most worts are boiled for 60-90 minutes, but that can be significantly increased. Longer boil times results in darker, more concentrated wort and the creation of melanoidins (think browned foods like grilled meats or bread crusts). In other words, long boil times results in a sorta caramelization of the wort.

Enter Gigantic Brewing’s Massive! This is a barleywine brewed with British Golden Promise malt (a pale base malt) that’s been boiled for 8 hours, resulting in a rather dark colored beer. Age it in Heaven Hill Bourbon barrels for two years, and that adds tons of complementary flavors of caramel, oak, and vanilla. My kinda bwizzle #BiL.

Gigantic has been around since 2012 and is considered one of the best Portland, Oregon breweries (in a town known for breweries, that’s saying something) and they’re known for their eclectic experimentation. They are apparently well known for their artwork too, which seems to reflect their brand pretty well. Let’s take a look at this beer that lives up to the brewery’s moniker: 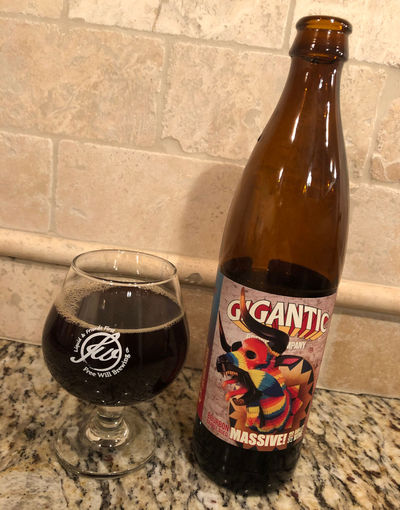 Gigantic Massive! Bourbon Barrel Aged Barleywine – Pours a murky brown color with barely a ring of head around the edges of the glass. Smells great, caramel, toffee, dark fruit, bourbon, oak, and vanilla. Taste is full of rich caramel, toffee, a bit of dark fruit, and lots of boozy bourbon, oak, and vanilla, with some bitterness balancing out the finish. Mouthfeel is rich and full bodied, but not flabby or underattenuated, light on the carbonation (but well matched to style), warming booze. Overall, yep, it’s a reeel gud bba barleywine. A-

I’ve also had Gigantic’s Most Most Premium Russian Imperial Stout, which was quite nice and probably should have been reviewed here. I shall endeavor to do better in the future.