Tonight was Beer Club, a gathering of beer minded folk from my work who get together every month at a local BYOB for libations and fun. I should note that what I call beer club is offically called “social club”, and there are frequently attendees who want nothing to do with beer. We’ve often had folks who bring wine or even stuff like sake or just plan, non-alcoholic root beer. In short, usually, only a portion of attendees are drinking the beer. Well, we had a great turnout tonight, and most everyone drank most every beer. I think only one beer was left unopened (a Brooklyn Oktoberfest), and most everything else was kicked almost as soon as it was opened. So it was an impressive showing tonight! Check it: 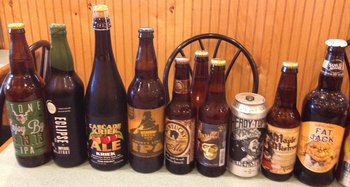 For the sake of posterity, some half-remembered thoughts on each beer are listed below. Standard disclaimers apply, these are not ideal tasting conditions and I was only half paying attention and you’d be a fool to trust most of these ratings. Except for the ones I’ve had before. Those are mostly awesome. Here goes:

And that just about covers it, another successful night, and I am already anticipating the next meeting!