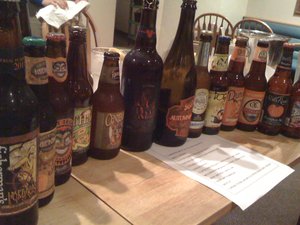 The Phillies are in the playoffs, which basically means lots of beer drinking (hopefully continuing throughout October). Tonight, a solid win to take the series to 1-1 and three craft beers:

Yards Extra Special Ale (ESA) – Drank straight from the bottle, so I don’t know the color, but it seems like a dark beer. Not quite a Porter or a Bock, but along those lines. BA has it as an “Extra Special / Strong Bitter (ESB)” and that seems appropriate. It’s got a lightly bitter, chocolatey finish that actually works reasonably well. This isn’t exactly my preferred style of beer, but it was very drinkable and I’ll probably have another one later this week (game 4?) B-

After this, I cleansed my palate with a helping of Doritos and grabbed another brew:

Dundee Oktoberfest – Holy crap, it’s a stealth macro! If you count Genessee as a macro, I guess. I don’t especially care about that sort of thing, but I was a bit surprised. Anyway, I saw this one and thought I should give it a shot given my recent Shoktoberfest Adventures. It smells of an Oktoberfest, but the taste is a little different. Not bad – a little spicier than your typical Oktoberfest, but otherwise pretty similar. Probably somewhere near the bottom of recent tastings, but still a lot better than typical macro beers. B-

Some more Doritoes and pretzels, and now the coup de grâce:

Fire Island Lighthouse Ale – Wow, is this bad. Maybe I just got a stale bottle, but it was very bland and not at all interesting. About the only thing it had going for it was a medium drinkability and good carbonation. Taste was stale and bland. I’m surprised I managed to finish it. D