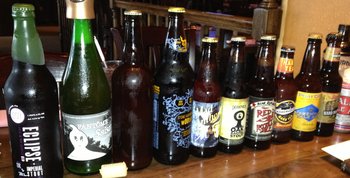 Tonight was beer club, a meeting of beer minded individuals from my work who get together for a meal and lots-o-beer once a month. An interesting turnout this month, as a few stalwarts were absent, but new attendees picked up the slack. This time around, we visited a Mexican BYOB with quite the ostentatious decor:

Phew, that place has some brightly colored furniture. But amazing salsa and good food too. For the sake of posterity, some thoughts on each beer we tried are below. As usual, conditions were not ideal, so you can and should be skeptical of my notes. In order of drinking (not in order of the picture above):

All in all, a pretty great night! We didn’t manage to get to all the beers in the picture, though I ended up taking a can of pale ale home with me, so perhaps a review of that in the coming weeks… That’s all for now.