South Florida’s Odd Breed is a small brewery focused on wild ales that I’ve become acquainted with thanks to Kaedrin friend Steve, who lives down those parts and generously volunteers to send some Florida cheer up my way from time to time. My guess is that it’s called Odd Breed due to their use of wild yeasts and other microflora, and totally not a fiendish, Doctor Moreau-esque plot to cross-breed humans with wild animals. However, if they do ever announce a new production facility location at a remote Atlantic island, I may be more skeptical. What can I say, I love beer, but I’m distrustful of many brewers’ stated goals. Um… anywho, they make good beer, so let’s take a look: 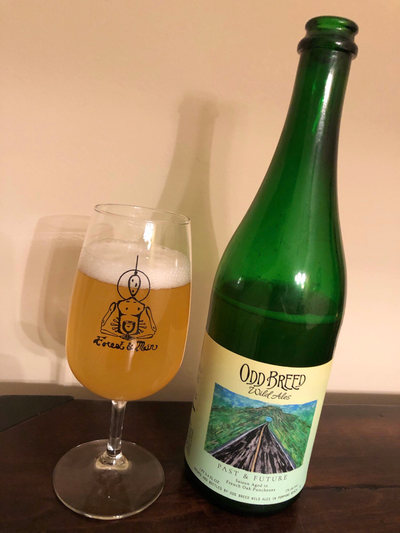 Odd Breed Past & Future – This is their Flagship, a pretty straightforward saison aged in French oak puncheons. I say straightforward, but the brewer says he’s been working on the recipe from years, and it’s evolved from a super-dry Dupont-esque clone to a beer that loosened the dryness and upped the acidity. Pours a pale straw yellow color with a solid finger of medium bubbled head that manages to hang on for a while. Smells quite nice, oak and saison spice, hints of tart fruit. Taste starts out sweet, hits that saison spice (like cloves and coriander), then tart fruit, finishing with a tart kick. Mouthfeel is light and crisp, well carbonated, and relatively dry. Overall, a very well executed saison, and a rock solid flagship that compares favorably with locals like Tired Hands. B+ 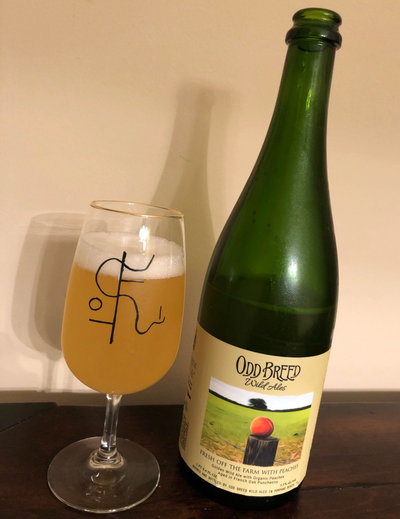 Fresh Off the Farm With Peaches – A blend of golden wild ales aged in those French oak puncheons that are then transferred onto nearly 800 pounds of hand-picked, ripe organic peaches (which were only lightly washed, so as to contribute their own microflora). Pours a pale, very cloudy straw yellow color with a finger or two of white head that sticks around for a bit. Smells great, plenty of peaches, some lactic funk, and even more peaches. Taste has a nice dry character with some peachy sweetness to it, followed by some puckering tartness and some oak, and then more peaches and did I mention peaches in the finish. Mouthfeel is light, crisp, and dry, moderate acidity, perhaps not quite quaffable, but headed in that direction. Overall, yeah, this is a real winner right here. A-

A nice first impression, for sure, and I have a couple others that I’ll be bringing to shares in the near-ish future. I suspect this won’t be the last you see of Odd Breed here…