The two-headed Roman god Janus could see into the past with one face and into the future with the other, and as such is generally regarded as the god of things like beginnings, transitions, and time (amongst other such concepts). So too is the month January named after Janus, as it’s a transition to a new year. An almost completely arbitrary one, to be sure, but it’s good to take some time out to strap on our Janus mask, take a step back and reflect on where we are and where we’re going. This can be a tricky thing in our increasingly polarized society, but fortunately beer is generally a simpler pleasure (especially if you focus more on the liquid in the glass rather than more nebulous things like business, law, or culture) and this is but a simple beer blog, so let’s take a look at my year in beer. Assorted thoughts:

So all in all, it’s been a good year for me and beer, but then, what year hasn’t been good? In accordance with the decline in blogging and increase in repeat beers, my top “new to me” beers of the year list is shrinking. This year, I’m only listing 20 beers with reviews (but another 10 that I never got around to reviewing for various reasons). Standard disclaimers apply: this is a list of beers that were new to me this year and which I reviewed on the blog. It’s not an all time favorites list, so if you don’t see something on here, then maybe I didn’t try it this year or perhaps I had it in a previous year. Or you have bad taste and are a bad person. It could be that too. This is a naturally arbitrary exercise, but I always have fun with it and enjoy making lists like this. Lists are American! So let’s do this thing: 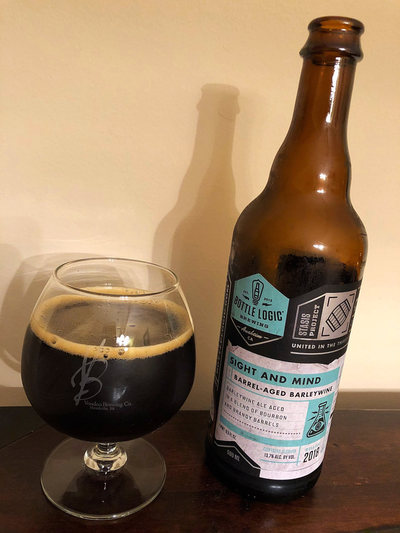 You will be seeing a full review of this Bottle Logic barleywine soon enough, so stay tuned. In other news, the new year in beer looks as promising as ever, so let’s get back to the hard, hard work of drinking beer, shall we?