The O.E. in this beer’s name actually does stand for Olde English, complete with the anachronistic pseudo-Early Modern English spelling… that we know from the classic 40 ounce malt liquor of choice that we may or may not have duct taped to both hands in college (an act of breathtaking stupidity we called “80 ounces to freedom” but which was later dubbed by our cultural superiors as “Edward Fortyhands“, probably a more fitting name), Olde English 800. Alas (or fortunately, depending on your point of view), this is not barrel aged malt liquor, but rather an excellent english-style barleywine aged in bourbon barrels for over a year (some sources say 15 months, the label is more vague). Unfortunately (or fortunately), it doesn’t come in 40 ounce bottles. Pour one out for #BiL: 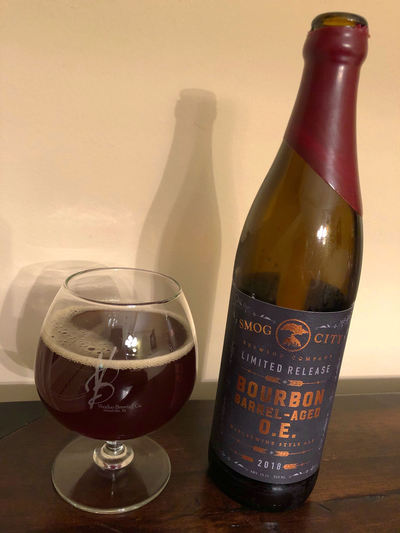 Smog City Bourbon Barrel-Aged O.E. – Pours a deep, dark amber brown color with a half finger of off-white head that quickly resolves into a ring around the edge of the glass. Smells amazing, rich caramel, toffee, brown sugar, hints of fruit, and that bourbon, oak, and vanilla. Taste hits the same notes as the nose, caramel and fruit, plenty of bourbon, oak, and vanilla. Mouthfeel is well carbonated, rich and full bodied, though maybe not quite as much as the nose would have you believe. Overall, this is pretty damn fantastic. A-

It’s not going to unseat ADWTD or Aaron as favorite barleywines, but few would, and this is much easier to get your hands on.