This upstate New York brewery specializes in making beer with the use of only local, New York ingredients, some of which are even harvested from their own grounds (including, as their namesake would imply, honey from an army of sentient bees they are no doubt breeding for eventual world domination). Ingredients are often sourced from all over the world, even when you’re “drinking local”, so this “brewing local” focus is a nice twist, provided the bees do not perceive us as a threat to be eradicated, which they surely will. I’ve looked into visiting before, but it always seemed out of the way and I’m terrified of these vicious, unstoppable bees and their blasphemous, inconceivable hive mind. Writing this post, I have just now realized that I could probably stop in during the prelude to next year’s Operation Cheddar (this year, I stopped somewhere else nearby that was not infested with swarms of monstrous bees, which we will get to in time). This particular beer appears to be something of a flagship and while not exactly widely available, I did find a bottle in PA. It’s made with a coolship (for, um, cooling, but also inoculating with wild yeast and other beasties) and aged in oak. 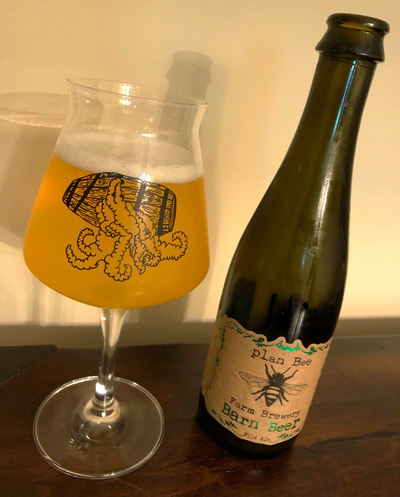 I’ve had small tastes of a couple other Plan Bee beers, and they’ve all been pretty darned good. We will have to find a way to snag some of those beers in the future. In the meantime, I’ve got a few beers from the brewery hinted at above, and astute readers will recognize that I initially wrote this in July and thus I have a backlog of reviews to get through, so stay tuned.

Update: I have been informed that the bees are not hostile and that “Plan Bee” is not a military operation proposing a world ending hivemind threat, but rather a simple, good-natured pun. Many apologies, some comments above have been struck from the record.