Even for a science fiction nerd like myself, the prospect of visitation by extra-terrestrial aliens is pretty unlikely. Since this is a beer blog, I won’t geek out on the scale and energy details needed for interstellar travel here, but I will note that a lot of the common stories about, for example, an alien craft crashing near Roswell, NM, strain credulity even further. If an alien species manages to travel thousands of light years, dodging all manner of interstellar obstacles, but gets tripped up by the tricksy New Mexican landscape, something doesn’t quite fit. Then again, maybe aliens did land in Alaska and start collaborating on beer with Anchorage brewing.

This is a light sour fermentated in French oak foudres with a Belgian yeast and then aged for a year in those foudres with a mixed culture and finished on what I must assume was an obscene amount of wild Alaskan blueberries. Doesn’t sound that unusual or experimental, but the color they were able to coax out of this stuff doesn’t seem possible without the aid of extra-terrestrial brewers. Or just a shit ton of blueberries. Probably the latter, but the former should not be discounted. Unfortunately, my bottle did not contain an overabundance of carbonation, so the color (of the head in particular) isn’t quite as striking in the picture as it could have been, but just look at this stuff! 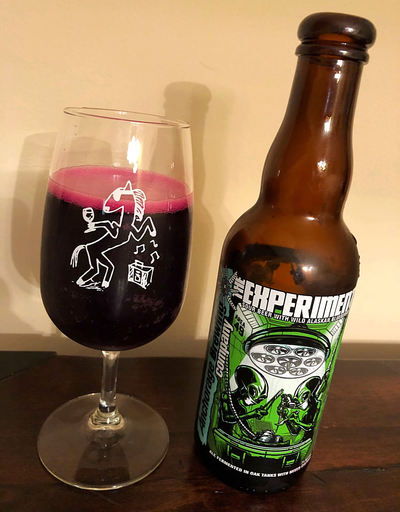 Anchorage The Experiment – Pours a deep, dark amber purple color with a finger of striking, dark purple head that alas, doesn’t stick around too long and which I was lucky to capture in the picture as much as I did. Smells quite funky, earthy, with those blueberries coming through strong. Taste is sweet, with that earthy funk coming through, a little oak, tons of blueberries with a very light tartness. The funk here is something that feels distinct to blueberry beers, the sort of thing that turns almost smokey, though in this particular case, they did a good job preventing that (I had a bottle of Cascade Blueberry once that did not fare so well; again, this Anchorage beer did much better). Mouthfeel is medium to full bodied, a little low on the carbonation (but there’s plenty there), low acidity too. Overall, an interesting *ahem* experiment. Tasty, but the most striking thing about it is the other-worldly appearance… B+

Pretty sure my teeth were bright purple after drinking this stuff. Many thanks to Kaedrin friend, fellow beer nerd, and Alaskan beer enthusiast Rich for helping procure the bottle. One of these days I’ll get my greedy biscuit snatchers on an actual bottle of ADWTD for myself, rather than just relying on the generosity of friends like Rich at a share. In the meantime, Anchorage’s more accessible brews are usually still worth a flier.