Back in the day, I wasn’t especially enamored with sour beers. Like the scared apes at the beginning of 2001, I’d cautiously approach the sour beer monolith and give it a tap every now and again, but it wasn’t until I drank a bottle of Oude Gueuze Tilquin that I became a true believer. Obviously, I’ve since expanded my horizons considerably, but I’ll always have a special place in my beery heart for Tilquin. They have slowly been introducing new fruited variants over the years (and are planning an expansion to drastically increase these offerings). A few weeks ago marked the worldwide debut of Oude Pinot Gris Tilquin. As it happens, Monk’s Cafe had some bottles on hand for that event, and while there, I also got to try some of the Oude Pinot Noir Tilquin. Both are rather nice! 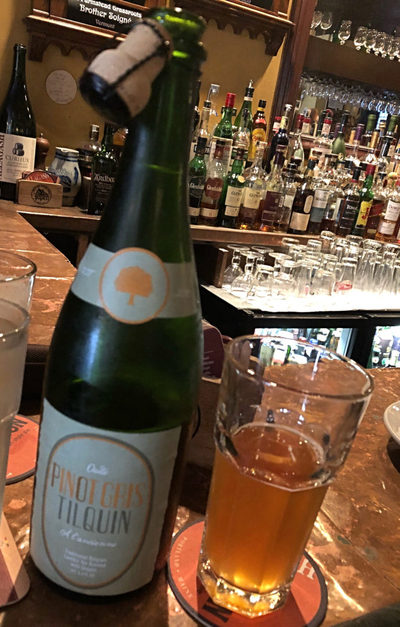 Oude Pinot Gris Tilquin à L’Ancienne – Made with 280 gr of, you guessed it, Pinot Gris grapes per liter of lambic. Looks like your standard gueuze offering, golden and a little cloudy, with minimal head. Smells nice, that vinous character coming through well, with a nice funk to it. Taste has the standard Tilquin character, funky earth, tart fruit, lemony sourness, oak, but with an added vinous sourness that is clearly coming from the grapes. Mouthfeel is a tad low on the carbonation, but good enough, medium bodied with a higher acidity than you get out of the usual Tilquin lambics, but it’s not going to strip the enamel off your teeth either. Overall, it’s definitely a winner, distinct from the other offerings, complex, tasty stuff. A- 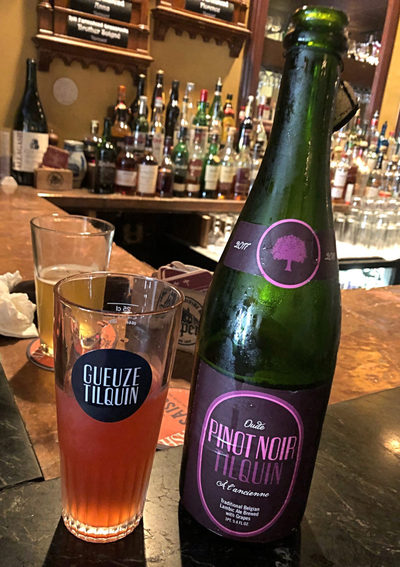 Oude Pinot Noir Tilquin à L’Ancienne – Made with 260 gr of Pinot Noir grapes per liter of lambic (batch 1 may have involved more grapes). The grapes come from Valentin Zusslin Estate, because you’ve probably heard of that one, right? Pours a darker pinkish red color with an off white head. Smells nice too, vinous aromas mixed with earthy funk. Taste is distinctly more funky and less sour than the Pinot Gris, but the grape still expresses itself well, this time adding a hint of drying tannins to the normal funky and tart fruit party. Mouthfeel is medium bodied, well carbonated, and lightly acidic. Overall, I liked this one a bit better than the Pinot Gris, but it’s quite close and they are different animals. A-

Tilquin is always a good time, and of the big three, is more reliably available. Variants like this… perhaps not as much, but even the standard Tilquin offerings are great and well worth seeking out. On second thought… no, just leave them on the shelves. Thanks.