So Jackie O’s Pub & Brewery is located in Athens, Ohio, and for this beer, they collaborated with Creature Comforts Brewing in… Athens, Georgia. This is surely not a coincidence and in fact, evidence of a deeper conspiracy. There is an Athens in New York and we all know the OG Athens in Greece. It’s spreading. Fortunately this conspiracy seems to be aimed at making beer, so we might as well take advantage.

This is a smoked barleywine style ale aged in bourbon barrels for about a year, which sounds all well and good… except for that “smoked” bit, which warrants suspicion. Sometimes this means you’ll be wondering who put their cigar out in your beer, but fortunately in this case, our collaborators either went with a light touch on the smoke, or the bourbon barrel treatment mellowed things out enough that it’s adding complexity without overwhelming the base. For grist thou art, and unto grist shalt thou return. Well that doesn’t make sense, but the beer is pretty good: 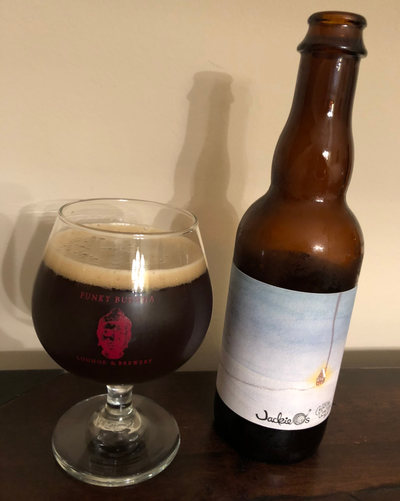 Jackie O’s Athens to Athens, Grist to Grist – Pours a murky cola color with finger of light tan head. Smell has a bit of caramel, bourbon, oak, and vanilla, and a background of residual fruity sweetness. Taste is sweet, lots of caramel, more bourbon, oak, and vanilla than the nose would imply. If I do the tasting equivalent of squinting I can detect a hint of that smoked malt coming through, but it’s not one of those situations that will leave you wondering who put their cigar out in your beer, it’s just a sorta background note of tobacco that adds complexity. Mouthfeel is rich, full bodied, and well carbonated. Overall, this is pretty damn good. A-

Very nice, but situations like these always make me wonder: what would a more “normal” version of this be like. I tend to think the same beer without smoked malt would be better, but maybe I’m just yelling at clouds here.