At this point, the annual sorty into Vermont for beer (codename: Operation Cheddar) has a consistent plan of attack: Warren Store, CBC in Waterbury, Alchemist Visitor’s Center, Lost Nation for Lunch, Hill Farmstead, and Foam are always onboard, with the occasional target of opportunity presenting itself (this year: Fiddlehead came into our sights). It’s a fun day trip for me (embedded as it is in a vacation rooted in upstate NY, which is like, totally closer to VT than PA), but since I do it every year, I’ll try not to bore you with repetition. Again. Anywho, enjoy some pics from the trip, a recap of the haul, and a few quickie reviews (that are light on tasting notes and heavy on ruminations, so less skippable than usual). 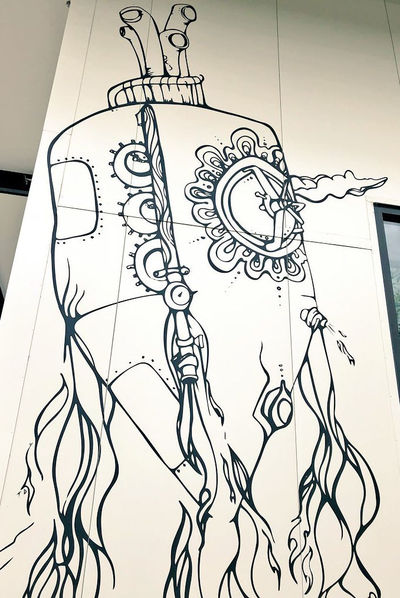 Some artwork from the Alchemist Building, it’s purty. 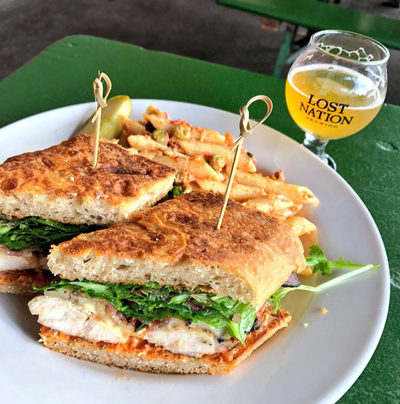 Lunch at Lost Nation, a smoked chicken sandwich thing that was great. If you’re ever ripping through Vermont, it’s worth stopping here for lunch, the food is excellent. 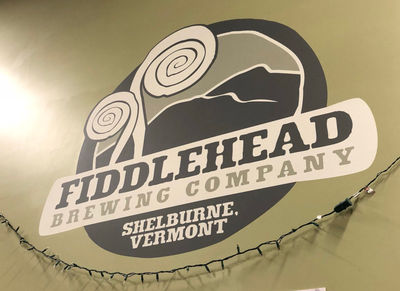 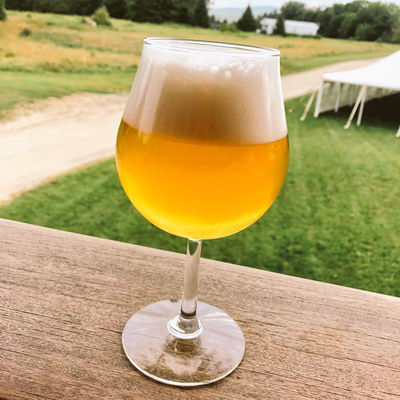 Hill Farmstead Poetica 2 – Operation Cheddar involves a lot of driving, so I’m generally reticent to partake in actually drinking beer at all. The only exception is usually a 5 ounce pour of something at Lost Nation. But since it looked like I was going to be at Hill Farmstead for a while and they actually had this interesting sounding thing on tap, I figured I’d give it a swing. You see, Hill Farmstead was hosting their annual Festival of Farmhouse Ales in the coming weekend, so they were packed with newly arrived beer dorks. Alas, since they planned on releasing a bunch of limited stuff during the festival, I had to settle for their “normal” shelfies (which are still phenomenal, to be sure). This was a special DONG release though, so I figured I’d give it a shot. Poetica 2 is basically Hill Farmstead’s Mary, a pilsner, but instead of simply lagering in stainless, they lagered in a single French oak puncheon in their cooler for three months. After that, they moved it to a stainless tank and krausened it with a new batch for carbonation (this is apparently a step they always do when lagering). Anywho, the result is a very good pilsner, much like Mary. Grassy, earthy hops, minerality, quaffable stuff. I was not detecting much in the way of oak and I didn’t take detailed notes, but I do want to say that it had more complexity than I’m used to from a pilsner. This, of course, means that the beer was a placebo and Hill Farmstead is now experimenting with mind control and we should indeed be quite worried because they’re good at everything so why not world domination? Ok, that got away from me there for a second, so I’ll just say that the beer is very nice and fans of Pilsners should look for future iterations on this mind control potion oaked lager. Let’s just say B+ and get on with it.

And so we come to the haul pics. For the record, some duplicate cans/bottles not pictured, nor did I hoard all these cans for myself. Indeed, I would say the majority of my purchases were passed along to (or shared with) friends. I’m not exactly a full time mule, but I enjoy spreading the wealth. So here goes: 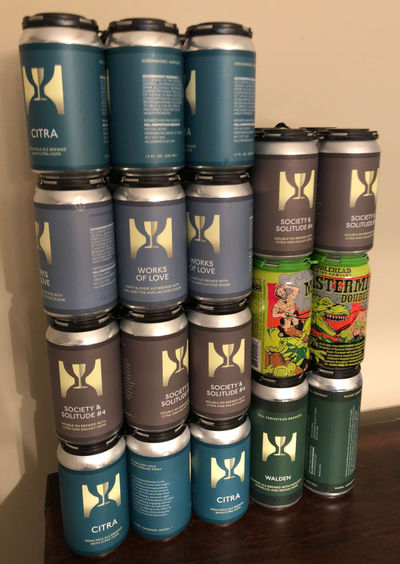 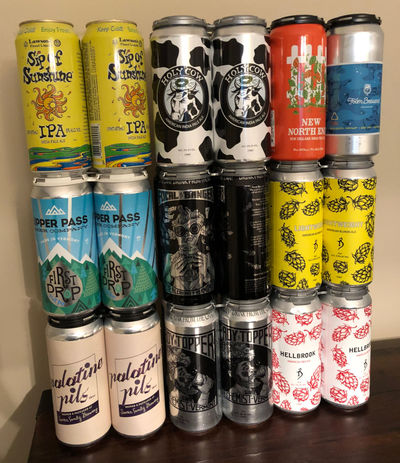 Can Haul – Part 2: Lawson’s Finest Liquids Sip of Sunshine, Alchemist Holy Cow IPA, Simple Roots New North End, Foam Built to Spill (many thanks to Kaedrin friend Eric for gifting this can and a few others to me when I met with him at Foam), 14th Star Make the Cut (not pictured, see below), Upper Pass First Drop, Alchemist Focal Banger, Alchemist Lightweight, Suarez Family Brewing Palatine Pils (not technically an Operation Cheddar acquisition, full explanation to come in a separate post), Alchemist Heady Topper, and Alchemist Hellbrook.

Funny observation: While Hill Farmstead was packed with long lines due to FoFA, Alchemist had a practically nonexistent line. Each year, the Alchemist gets less crowded. Plenty of people milling about, but I basically just walked up to the counter and got my beer. Go figure. 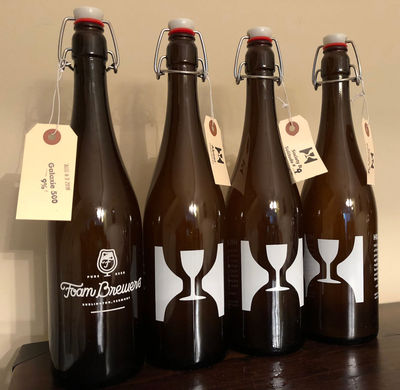 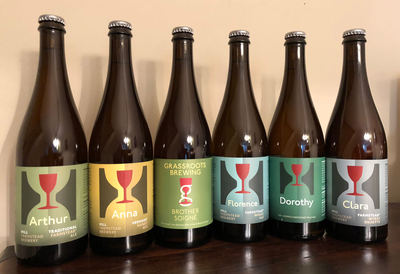 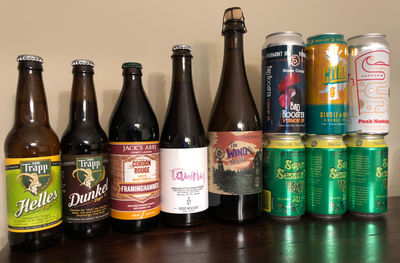 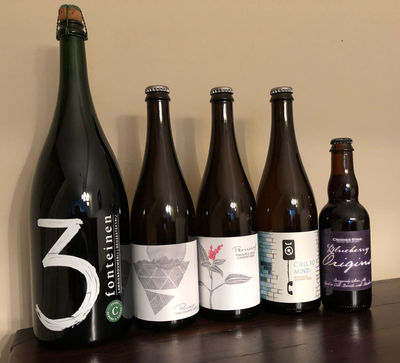 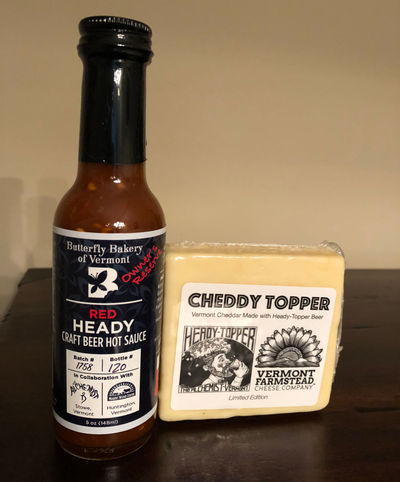 Phew, that’s quite a bit of beer. Now let’s take a closer look at a few of these that I drank: 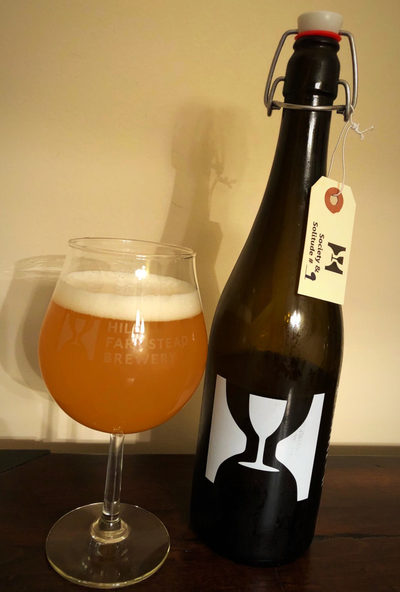 Hill Farmstead Society & Solitude #9 – Pours a cloudy, golden yellow with a solid finger of white head that leaves plenty of lacing as I drink. Smells nice, sweet, lots of tropical fruit hops, mango, pineapple, and so on. Taste is also quite nice, sweet, citrusy, pine, balance in the finish. Mouthfeel is perfect, tight, soft carbonation, medium bodied, drinks like a dream. Overall, oh jeeze, another excellent HF IPA, stop the presses. A- 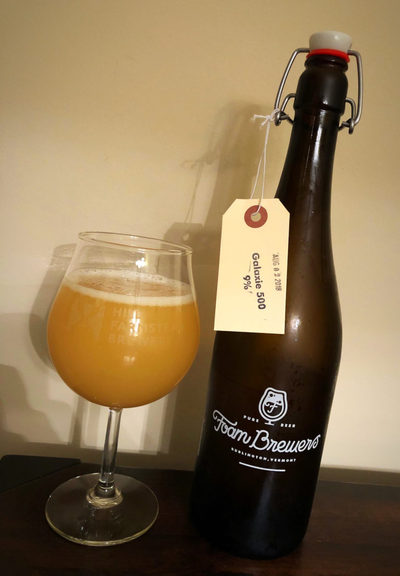 Foam Galaxie 500 – Pours a very cloudy, milky looking straw yellow color with half a finger of white head that doesn’t stick around too long. Smells of bright citrus, tropical fruit, stone fruit, and the like. Taste is very sweet, lots of those bright citrus hops, with a sharp edge to it, finishing sweet and juicy. Mouthfeel is a tad low on the carbonation, medium bodied, with a sharp alcohol note. Overall, this is a really nice Galaxy DIPA, a bit on the strong side, but no less delicious for it. B+ or A-

Alchemist Holy Cow – Apparently one of their staples during the halcyon days of the old Alchemist brewpub, it was a local favorite long before Heady became the hotness. Pours, well, I don’t know, because I drank it from a can. I’m guessing pale. Smells citrusy, bright graprefruit. Taste is light and citrusy, finishing with a nice balancing bitterness. Mouthfeel is crisp, clean, and dry, good carbonation, light, quaffable stuff. Overall, it’s not going to blow people away, but I could drill a four pack of these with ease. B+ 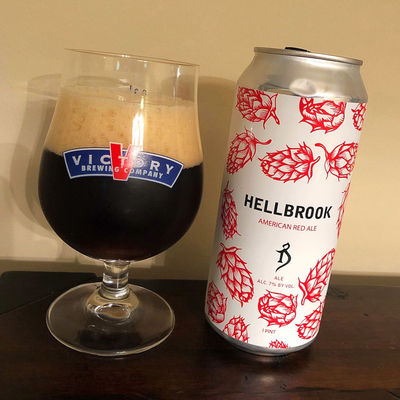 Alchemist Hellbrook – A pretty straightforward Amber ale, a style I can appreciate when done well (and when hopped to high heaven), this doesn’t quite live up to the reputation of the Alchemist’s best work. Indeed, I think the pattern is that after Heady and Focal, there’s a distinct stairstep in quality to their other offerings. I don’t know that I’ve had anything outright bad, to be sure, but all of these others are somewhat standard takes, if well executed. None are quite the style-defining heights of Heady or Focal… This one pours a dark amber, almost brown color with a couple fingers of off-white head. Smells of citrus and dank, resinous pine, with crystal malt lurking in the background, light caramel tonez. Taste hits that crystal malt character, with plenty of piney, resinous hops in the middle, finishing with a balancing bitterness and dank hop profile. Mouthfeel is medium bodied, well carbonated, and pretty well balanced. Overall, another solid brew here. Not going to make headlines, but it’s better than your typical amber ale, if not quite at the top of the style. B+

Alchemist Lightweight – Look, I’m not sure what I was expecting from this American Blonde Ale, but what I got was an almost Kolsh-like easy drinker, earthy, grassy, and herbal. Nice lawnmower beer, but again, not going to set the world on fire like you might expect from the Alchemist. I feel like I’m bagging on Alchemist here, but in reality, these are all solid little beers. Sometimes they’re disappointing due to the high bar set by Heady and Focal, but I will say that I’m still going to continually seek out additional varieties of Alchemist stuff. None of it is bad, and it sometimes approaches the sublime, so why not? B-

Frost Beer Works Lush – I had the Plush DIPA a while back, which is a variant of this beer, and heck, they’re both really good DIPAs. Typical Northeast IPA type stuff, not going to replace the top tier, but certainly worth a flier if you’re making your way through VT’s hop laden waters. B+

Lawson’s Finest Liquids Super Session #7 – If you’ve had any of the Super Session beers, you know what you’re in for here (I haven’t had them in close enough proximity to notice a major difference, but who knows…) Typical session IPA territory, but it doesn’t quite feel like a “diet” IPA like some of them do, it’s a really nice, quaffable, citrus IPA that is light and crisp. It may not stand out against a sea of DIPAs, but it’s a nice summer beer. B

Foam City Lights: Pineapple & Tangerine – A pretty straightforward kettle soured fruit beer, it reminds me a bit of Burley Oak’s JREAM beers, though I think those are better. For whatever reason, this one didn’t quite connect with me. C+

Simple Roots New North End IPA – Pretty straightforward NEIPA stuff, not top tier, but better than the last Simple Roots stuff I had on a previous Operation Cheddar mission. One thing about these non-hyped cans that always gives me pause is that they tend to be a bit less fresh, which will have an impact. This is not entirely their fault either, as I bought this on 8/2 (when it was already a couple weeks old), but didn’t drink it until 8/17. Not a ton of time, to be sure, but this wasn’t the can I was rushing to try either, and you can see that the highest rated stuff in this post tends to be the freshest as well. Freshness isn’t the only lever here, but that’s probably a part of it. Regardless, this is a fine beer, worth a flier if you’re in VT. B

Burlington Peak Nostalgia – This is a Strawberry Milkshake IPA with Vanilla & Milk Sugar, a style that is hyped to high heaven thanks in large part to Kaedrin’s local Tired Hands, who make a whole series of Milkshake beers that are awesome. This Burlington take certainly emphasizes the strawberry aspects well (moreso even than the Tired Hands equivalent), but the balance isn’t quite on point and it’s overall a little disappointing. But my frame of reference is the Tired Hands Milkshakes. I’ve certainly had worse takes on the style, and while it’s a wholly different beer, this beer is far better than Burlington’s Strawberry Whale Cake, which I got on a previous Operation Cheddar. B 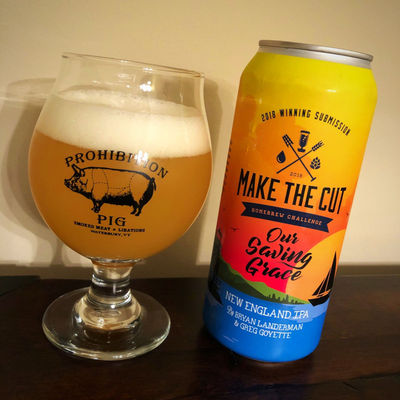 14th Star Make the Cut Saving Grace – Apparently there’s a local homebrew competition where the winner’s recipe is scaled up and brewed at 14th Star. This is a very nice Northeast IPA dry hopped with Mosaic, Citra, and Ekuanot. And it’s really good, lots of juicy citrus and pine, good mouthfeel and pretty easy going. Would try again, though I suspect we’ve seen the last of this particular beer due to its origins. B+

Phew! That’s a lot of beer, folks. Many apologies for the lack of blogging recently, I hope this makes up for it. I’ve still got quite the backlog of reviews, and plenty of things from this trip that I haven’t dug into yet, so much moar to come. Stay tuned.

This brings this year’s Operation Cheddar to a close. Next year promises to hold at least a minor shakeup in that Lawson’s Finest Liquids is finally opening a brewery, taproom, and retail store in Waitsfield, VT (not far from the Warren Store, which was always my scheduled stop to find Lawson’s and thus will probably fall out of the rotation next year). Most exciting!