A couple of years ago, Alex from dontdrinkbeer.com noticed that while there was a Facebook group for seemingly every style of beer, there wasn’t one for Barleywine. So he created Barleywine is Life (#BiL) and the group quickly became a wretched hive of scum and villainy. Seriously, it’s a crazy little group of people and there’s a surprising amount of drama. I know, it’s the internets, what do you expect, but this is still a step above the usual dank memes and inappropriate comments (in, like, a good way).

Anywho, the date 8/17 has become something of a holiday to the group (817, like BIL, get it?) so I figured I’d break out the one VT barleywine I procured during during the most recent Operation Cheddar… Tawny is an English Style Barleywine (that’s good) aged in maple syrup bourbon barrels (very good) with vermont table grapes (Um… I don’t know what to think about that). Let’s dig in: 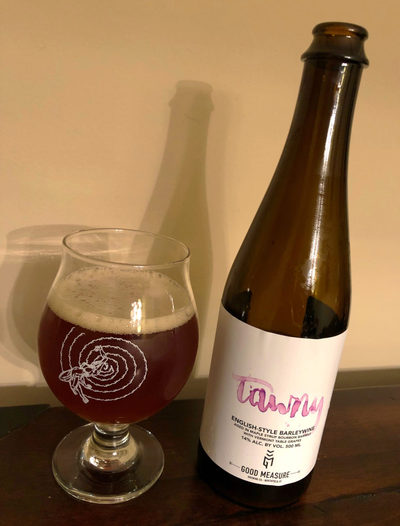 Good Measure Tawny – Pours a copper amber color (dare I say, tawny?) with a finger of off white head. Smells sweet with a distinct vinous character, those grapes coming through, and maybe some of that syrupy goodness too. Taste starts sweet, malt and fruit, that distinct vinous character again, some caramel, toffee, oak, and vanilla, finishing with some dry grape notes (a tannic sort of dryness, like a dry red wine). Mouthfeel is rich, well carbonated, and full bodied, a bit of boozy heat, drying tannins in the finish. Overall, it’s good, but I’d rather the grapes were left out of it. B

It was certainly nice to break up the giant wave of IPAs I’ve been drowning in of late (it’s the struggle, you know?) with something like this, and while I wasn’t a huge fan of the grape addition, it was at least an interesting experiment. I’d be curious to try more Good Measure stuff next time I’m in VT. I’m going to have to plan a trip for cooler months of the year so I don’t overload on IPAs and Saisons the way I tend to do during the summer months.