Allright, stay with me here. In 2012, Kane was celebrating their first anniversary, and they put out a beer called Three Hundred Sixty Five (the significance of this name is obviously a total mystery.) It was comprised of a blend of 70% Belgian-style quadrupel and 30% barrel-aged imperial stout. Most of that was released then, but some of the finished blend was racked back into bourbon barrels for another year. At their second anniversary party in 2013, they incorporated some of that aged juice into their next anniversary beer, Seven Hundred Thirty (again with the cryptic name), but reserved some of it for release on draft on its own. At their third anniversary in 2014, they incorporated Seven Hundred Thirty into their next anniversary beer, One Thousand Ninety Five (I suppose I’ve worn this naming joke down to the bone, so I’ll refrain this time and this time only). I think you’re getting the solera-like pattern here, but the point is that at that third anniversary, they finally released some of the original Bourbon Barrel-Aged Three Hundred and Sixty Five in bottles. So if I’ve got the chronology right, they brewed and blended it, aged it in bourbon barrels for a year, then bottle conditioned for another year before releasing.

Then it made it’s way to me after another, er, 3-4 years or so in the bottle. Quite the storied beer. As we’ve seen recently, Kane’s got a pretty darned good barrel program, so let’s dig in: 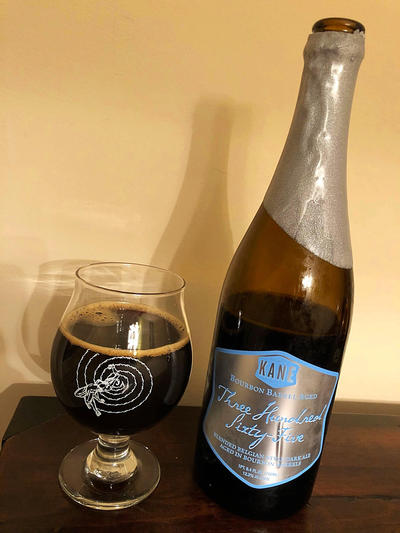 Kane Bourbon Barrel Aged Three Hundred and Sixty Five – Pours a murky, very dark brown color with a half finger of off white, fizzy head that does not stick around very long. Smells nice, lots of that bourbon, oak, and vanilla, along with some almost cola-like spice notes. Taste is very sweet, hits some Belgian yeast spiciness, that cola-like character is there too, with a nice, boozy bourbon, oak, and vanilla character. Mouthfeel is on the lighter end of full bodied, rich but again on the lighter side of that spectrum, nice tight carbonation too. Overall, it has a neat sorta bourbon barrel aged coke feel to it, with some added Belgian yeast notes for complexity. Having had some of the newer anniversary blends, I suspect that while this was quite nice, it would have been better if not aged as long as it was. Still really happy to have tried it! B+

Many thanks to Gene of Talkbeer for sending this my way (he was very generously making good on a mixup from a while back that was totally not his fault). I will most certainly be seeking out more from Kane’s barrel program.