Every year around Halloween, I gird my loins and make a trek into New Jersey for some spooky beer hunting. Alright, fine, it’s a day with some sort of seasonal-themed mini-golf and a haunted restaurant, and while I’m there, I hit up some Jersey liquor stores to see what I can find.

Carton has been a reliable little brewery for a while now, and I really enjoy Boat beer and 077XX, so when I saw this newish IPA offering that was unheard of by me, I grabbed a four pack. I was initially confused by the name, thinking it was some form of Double IPA, though I couldn’t figure out what the leading “I” stood for. It turns out that this beer is actually a reference to the Id (and that Carton also makes beers called EGOIPA and SUPEREGOIPA, the latter being a whopping 13% ABV). Very Freudian: 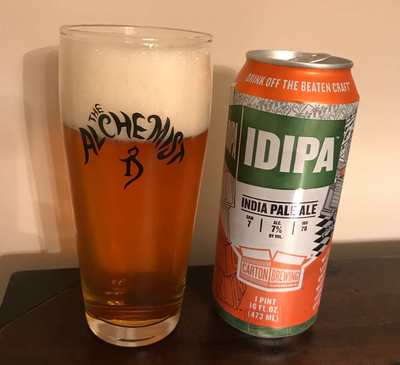 Carton IDIPA – Pours a clear golden yellow color with a finger of fluffy white head. Smells of dank, resinous hops, a little citrus. Taste is sweet, some crystal malt here, with citrus and pine hops. Mouthfeel is well carbonated, medium bodied, easy going. Overall, solid old-school IPA here, a little more muted than I’d expect, but I’m chalking that up to freshness (though it should probably keep this long) and it’s not like it’s really bad at all or anything. B

Carton continues to interest me, of course, and I will always snag something from them when I see it…