This isn’t exactly Vermont Beer Roulette, that venerable practice wherein I just grab a bottle (or can) of something in Vermont that I’ve never heard of and hope for the best, but it’s close. In accordance with tradition, I did a little asking around before this latest Operation Cheddar to see if there was anything I should be on the lookout for, and one of the things that came up: get some Upper Pass!

They’ve only been around for about a year and a half, but if these two cans are any indication, they’ll be here to stay. Currently brewing on a tiny one barrel system, they do manage to slip in the occasional big batch at the Von Trapp Brewery in Stowe (I believe my two cans hailed from one of those supplementary batches). I don’t know what it is about Vermont that breeds great IPAs, but Upper Pass has joined those hallowed ranks. Maybe it’s in the water. 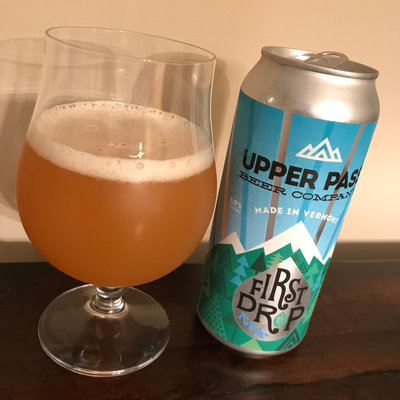 Upper Pass First Drop – An “American Pale Ale” (but seriously, pretty much indistinguishable from an IPA) made with Golden Promise and Pilsner malt, a blend of two “East Coast” yeasts (and we know how important that is to the NEIPA style), and a lineup of hops that include Azacca, Centennial, Citra, and Mosaic. Pours a cloudy golden orange color with a finger of white head that leaves lacing. Smells great, sweet stone fruit, almost peachy, with some dank pine peeking through. Taste hits that juicy citrus and dank, resinous pine note hard, peaches and pineapple, with a balancing but only moderate bitter bite in the finish. Mouthfeel is light to medium bodied, well carbonated, relatively dry, and quaffable. Overall, this is fabulous stuff. Very well balanced and crushable. A- 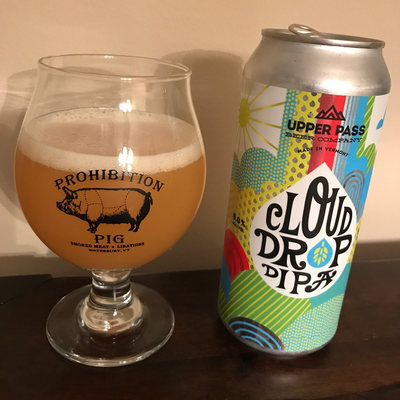 Upper Pass Cloud Drop – Pours a little paler orange, cloudier, and a half finger of white head and lacing. Smells just as good, less stone fruit and less dank but still juicy and citrusy. Taste hits that juicy citrus hop character, sweet and less bitter, but still relatively balanced. Mouthfeel is medium bodied, well carbonated, a little thicker than First Drop, sticky with a faint but pleasant hint of booze. Overall, while I think I might actually like First Drop a teensy bit better, this is still pretty fantastic and earns the same grade! A-

Always something new and great brewing in Vermont, these folks are putting out some great beer and we will be on the lookout upon future sorties into Vermont.