England’s Siren brewing started luring unsuspecting and wary travelers to their doom a few years ago, and the first beer they brewed was a big American-style barleywine – their “maiden” voyage, if you will. They promptly stashed the result away in various wine and spirits barrels and got a crew together to come up with a harmonious blend at the end of the next year. They never fully empty the barrels, though, leaving at least 10% left and refilling the remainder with fresh Maiden for the following year’s batch. A sorta hybrid solera type system going on here, and I find myself reminded of a few big American efforts along similar lines. The solera-esque nature recalls the Bruery’s Anniversary beers, the same-beer-in-different-expressions approach is like FiftyFifty’s Grand Cru, and the whole Anniversary blend thing reminds me of Firestone Walker’s Anniversary beers… Pretty good company, if you ask me.

This particular edition is the third in the series. About 50% is fresh American-style barleywine, the rest was the previous year’s batch aged in a variety of barrels: 33% Auchentoshan (non-peated Scotch that has a reputation as a lighter whisky that makes a good component in blends), 21% Red Wine, 15% Jack Daniels, 9% Pedro Ximenez, 9% Madeira, 4.33% Tequila, 4.33% Glentauchers and 4.33% Banyuls. I’ve been somewhat lax at covering the whole British beer scene on this blog (hey, I’ve got a crapton of American breweries to keep up with here, give me a break), but this is the sort of thing that makes me want to succumb to that Siren song: 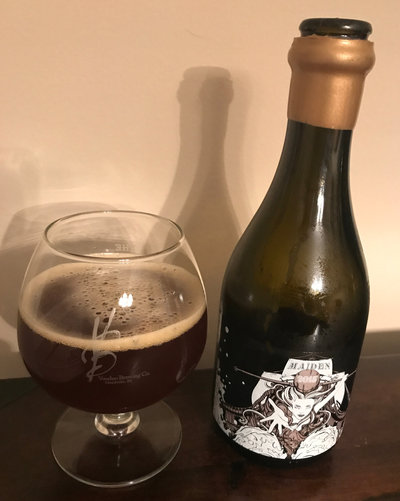 Siren Maiden 2015 – Pours a dark amber-hued brown color with a finger of off-white head. Smells of dark fruit, toffee, oak, with a little whisky and wine character coming through. Taste starts off rich and sweet, with some oak, fruit, and toffee kicking in, but dries up a little towards the finish, which has the remnants of a bitter hop bite. As it warms, more of that dank, aged hop character emerges. Mouthfeel is rich and full bodied up front, but thins out a little in the finish, a little booze heat, but nothing untoward, medium to high carbonation, but on point. Overall, a damn fine, complex barleywine. B+

I may have to dig a little deeper into Siren’s catalog, as this was quite pleasant. Would love to try other vintages to see how much the differing blends and barrels contribute.