I was impressed by Florida’s Barrel of Monks when I sampled their Three Fates Tripel last year and have finally managed to procure more of their wares. Their wheelhouse appears to be straightforward Belgian styles or Trappist ales that don’t inspire as much beer nerd enthusiasm as freaky sours or barrel-aged pastry stouts and the like. I’m as guilty of this as anyone, but it is genuinely nice to take a step back and try a straightforward Belgian Tripel or Dubbel. So when these two bottles came my way, I was ready.

First up is actually something a little more trendy that might twixt beer dorks’ nethers more than the straightforward stuff. Monk de Soleil (Monk of the Sun?) certainly starts off as a simple Belgian Pale Ale, but it then undergoes a secondary fermentation with added Brettanomyces Bruxellensis and then endures some dry-hopping. This collaboration with 7venth Sun Brewery certainly hits that funky sweet spot that beer geeks crave: 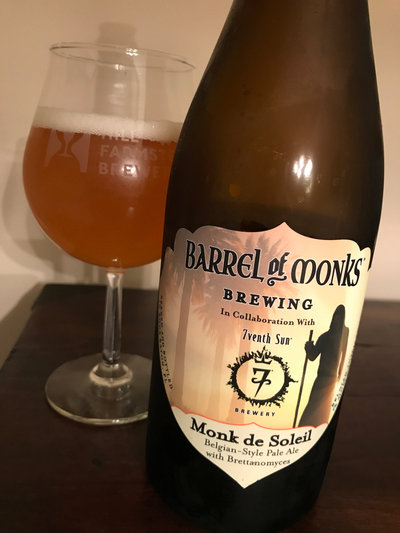 Barrel of Monks Monk de Soleil – Pours a cloudy golden orange color with lots of head that sticks around for a bit. Smells fantastic, great earthy funk mixed with fruity esters and a little clove. Taste hits that funky Brett note pretty well, plenty of spicy phenols, a little bit of that fruit. Mouthfeel is highly carbonated, crisp, and effervescent, highly attenuated and dry. Overall, this is a great little Brett beer. A

Next, we’ve got a humble Belgian Dubbel. Not much else to it, except that like their Tripel, this is a very well executed take on a style most American brewers don’t even try, let alone do well… 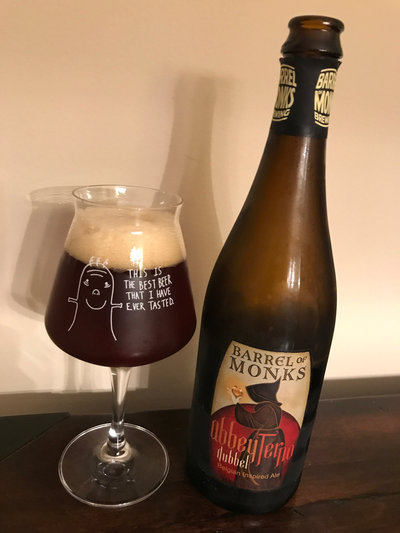 So these folks are 3 for 3. Not necessarily lighting the beer world on fire with trendy stuff, but I really appreciate the well executed Belgian styles.