Interboro Spirits & Ales continues NYC’s beer renaissance. Less than a year old and I feel like they’ve joined their neighbors like Other Half, SingleCut, and Grimm (amongst others) as brewers to keep an eye on. Not to shabby for a region that used to be a bit of a wasteland for good beer (if my last trip to NYC a few months ago is any indication, they are greatly improved on all fronts, though still not where you’d expect for a city that big).

Premiere IPA is a well executed, clean, straightforward take on the style, but hopping it with Citra, Mosaic, and Galaxy certainly gives it a sheen that beer nerds can latch onto: 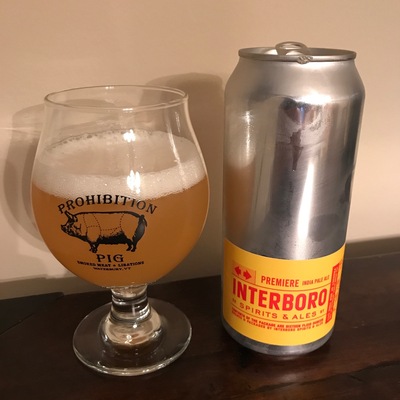 Interboro Spirits & Ales Premiere IPA – Pours a hazy pale yellow color with a finger of fluffy white head that sticks around for a while. Great aroma of tropical citrus with some floral notes and a hint of pine in the background. Taste isn’t quite as intense as the aroma, but it’s got that same citrus and floral one/two punch, with a nice light but dry bitterness in the finish. Mouthfeel is perfectly carbed, light to medium bodied, moderately dry, quaffable. Overall, this is one damn fine IPA. Not a NEIPA, but not everything has to be, you know? A-

NYC is killing it. Many thanks to fellow Beer Nerd Pete for gifting this can to me. Who knows if or when I’ll get more, but I’ll certainly be keeping my eyes open for moar of their wares.