It’s not all Bourbon and Wine here in this time of Beer Recession. We also like to tackle the weird, off-the-beaten path offerings, like distilled beer… (Yeah, yeah, “beer” is used in a more general sense in this distilling literature, but look where you are! I’m referring to commercial beer offerings like Racer 5 or Duvel. Get with the program, people.)

During last year’s 6 Weeks of Halloween (an annual horror movie marathon centered around that bestest of holidays), I wanted to get something seasonal and an alternative to pumpkin-spiced everything. Looking at various available options, I settled on Laird’s 12 Year Old Apple Brandy.

Established in 1780, Laird’s bills itself as “America’s oldest native distillery” and is based in New Jersey and Virginia. They make 6 expressions, one a standard Applejack (a blend of Apple Brandy and neutral grain spirits), a bonded Apple Brandy, an Unbonded Apple Brandy (still at 100 proof), an unaged edition, a 7.5 year old Apple Brandy, and the 12 Year Old that I’ll be reviewing today. Apparently the Bonded Apple Brandy is the Van Winkle of the category, fueled by ravenous bartenders and their cocktail-swilling patrons. Alas, the 12 year old, while a fine pour, didn’t quite scratch the itch I was looking for, feeling more like a light bourbon or maybe a generic brandy: 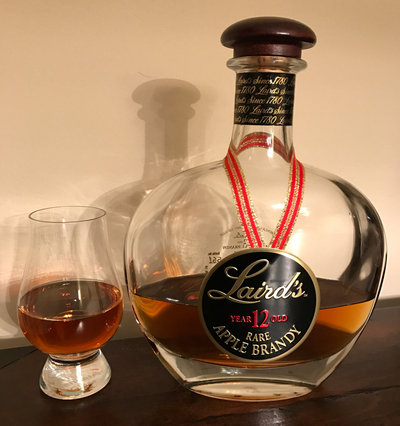 Laird’s 12 Year Old Apple Brandy – Pours a clear golden orange color. Smells oaky, sweet, and fruity, though I don’t know that I’d peg this as apple brandy were I trying it blind. Maybe because I know this is apple brandy, if I do the olfactory equivalent of squinting, I can kinda see it as being apple-based. The taste is pretty well dominated by oak, maybe a faint hint of generic fruit, some spice, but really just dry oak all the way through and especially in the finish. Mouthfeel is light (perhaps owing to the lowish proof) and a little dry. Overall, this feels more like a standard bourbon than apple brandy, though it does have more fruity notes than bourbon. Frankly, I was hoping for a more clear apple character. C+

Beer Nerd Musings: I’ve had two beers that were aged in Laird’s Apple Brandy barrels, both from Voodoo (whose barrel program is small but quite impressive). Gran Met uses a tripel base and took on a huge amount of Apple Brandy character, almost like a boozy apple pie in liquid form. The Apple Brandy Black Magick has a bigger, bolder stout base, but the Apple Brandy still comes through. As such, I think I’ll need to track down some of the bonded/unbonded hooch to get that seasonal character I was missing in the 12 year old.

Fellow Travelers: I probably wouldn’t even have thought of this if Sku’s Recent Eats hadn’t been tearing through various Apple Brandy products in October of last year (i.e. prime 6 Weeks of Halloween territory). Alas, I procured my bottle of Laird’s just before he reviewed it, with similar results. Had I waited a little and saw his review, I probably would have tried to track down one of the “younger” products that seem to display more apple character…

A nice enough detour; up next comes more bourbon and maybe some tea. Also some syrup and hot sauce that… are more relevant than you might think. I know, I know, those last few aren’t alcoholic. Whatever shall we do? I think we’ll just have to get over it. Further out, we might have another unusual non-whiskey, beer-adjacent spirit on its way, so stay tuned.