So I’ve been aging beer for a while now, both intentionally and unintentionally, and it’s often an interesting exercise. However, it’s also pretty rare for a beer to get better over time. It’s usually different and sometimes worse than fresh, but better is, again, rare.

In general, my advice continues to be to drink fresh. If you can only get one bottle of something special, drink it fresh. If you can get a second bottle, it’s a fun exercise to age it, but seldom does a beer age incredibly well. At least, not for very long periods of time. Lots of beers can get better or be just as good over a few months, but not many will last over a year and the ones that can last 5 years are even more rare. Of course, there are many variables. My “cellar” doesn’t exactly have ideal conditions, so you may have better luck. Bottle variation exists, especially when it comes to wild ales. Some people don’t like harsh booziness and time can clear that up sometimes. And so on.

Since Victory is local, I’ve stockpiled plenty of their offerings over the years. Readily available, not too pricy, and quality beer – they make good candidates for aging experimentation. Let’s see if this patience has paid off: 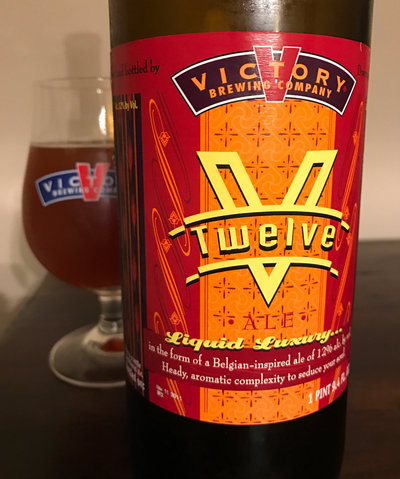 Victory V-Twelve (2011) – This is a special one. I loved it fresh back in the day and squirreled this away to see how it would age. High alcohol, darkish beer, I thought it would do well. Naturally, I haven’t thought too much about it in the intervening time, especially as my tastes evolved over the years. In a recent attempt to drink down a bit of my cellar I noticed something curious. The bottle sez “Should be enjoyed within 5 years” and the bottling date was Nov 11 2011. So of course, I popped the cork on Nov 11 2016. Nailed it. 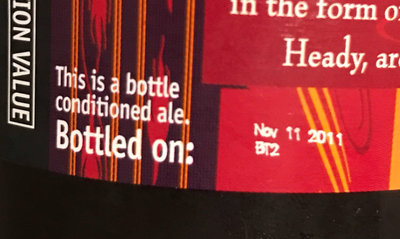 Pours a murky amber orange brown color with just a cap of off white head. Smells nice, lots of yeast-driven, rich, dark fruit, brown sugar, maybe even a little floral aroma, toffee too, hints of spice. Taste is rich and sweet, ample malt backbone, dark fruit, raisins, dates, yeasty esters, a little oxidation definitely showing, but nothing overwhelming, sherry, toffee, brown sugar, finishing with hints of Belgian yeast spice and a bit of booze. Mouthfeel is full bodied, rich, and chewy, a sipper for sure. Overall, this is still fantastic. I haven’t had it fresh since, oh, 2011, but it’s holding up pretty darned well. A high B+ (I originally rated this an A, but taking into account ratings inflation puts this about on par with my feelings on it fresh.

Victory Java Cask (2015) – The story on coffee beer is that the coffee tends to fade over time and hoo boy is that the case here. For the coffee ambivalents like myself, that’s not a huge deal, but this was a huge coffee bomb when fresh, and while the coffee character is still there if you look for it (or if you’re particularly sensitive to it, ahem), the bourbon barrel stout character is now the majority of this beer. It’s actually quite pleasant, but then, I’m one of the aforementioned coffee ambivalents, so I would be like that. I’m still hoping that Victory will put out a non-coffee version of this same beer someday, but that’s not in the cards this year (FYI, this was written in November 2016 – ed.). We’ve got a Rye barrel variant this year, as well as a rebrew of this, but I hold out hope. Still, I’m quite enjoying this and won’t even drop the grade. Again, coffee-heads will be disappointed by an aged bottle of this stuff (and anecdotally, I’d say most of the dropoff had occurred within 6 months). A-

Victory Otto (2011) – A smoked dubbel? Not your common style, and at the time, the smoke completely overwhelmed any Belgian yeast characteristics. Pours a dark amber color with a finger of almost white head. Smells of belgian yest, raisins, and just a bit of smoke. Taste goes similarly, the smoke has really mellowed out over time (fresh, the smoke was potent and overpowering, now it’s barely there). Proooobably held on to it too long, but it’s held up much better than your typical dubbel. Will try the Bourbon Barrel version next (it was a massive improvement over the original). B- (Update, I brought Otto in Oak to a share recently and it has fared a little better, but is also well past its prime. Solid B material.) 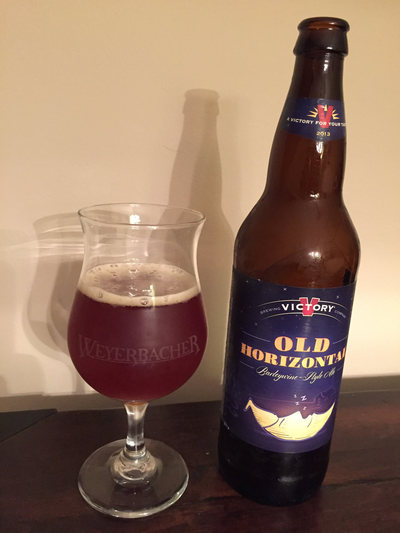 Victory Old Horizontal (2013) – No fancy stories here, just realized it had been about 3 years, which is plenty for a beer like this. Turns out, I think it could probably stand up to more, but I’m still really glad I opened this when I did. Pours a dark amber color with a finger of white head. Smells of caramel and toffee, hints of dried, candied fruit. Taste also has that rich caramel and toffee character, sweet but not cloying, some modest hop character too. Some oxidation present, but nothing overwhelming and it ends up adding complexity. Mouthfeel is full bodied, rich, moderate carbonation, hints of booze. Overall, this has aged very well, would do again. I still have a couple of Oak Horizontals laying around, so I should probably strap one of those in next. B+ or A-

So there you have it. 5 years probably too long, even for something like V-Twelve. Three years, though, seemed fruitful. Stay tuned for more vintage drinking, including one that was 7 years old (and still drank incredibly well).