Foam Brewers opened their doors just over four months ago and you know how on-top-of-the-game we are here at Kaedrin, so I simply had to scout them out. Or, you know, I could have just stumbled upon it at the recommendation of @HopSnobbery and @LipstickNLager during my annual Operation Cheddar sorties into VT. It’s a pretty standard small-brewery tasting room operation, but it’s situated at a gorgeous location, right next to the Burlington waterfront (with plenty of parking too).

Started by alums of Switchback (and apparently, before that, Magic Hat), these fellas have seemingly dialed in their IPA and DIPA game already… which is really saying something for a Vermont brewery. I had a small glass of Lupi Fresh whilst there and snagged this DIPA in growler form for the haul back to PA. At this point, I’m regretting not filling up a few other growlers, because I am the worst. Built to Spill seems like a pretty straightforward Northeast DIPA named after an indie rock band (the other DIPA on tap was called Pavement, I see what they’re doing there), and it’s fabulous: 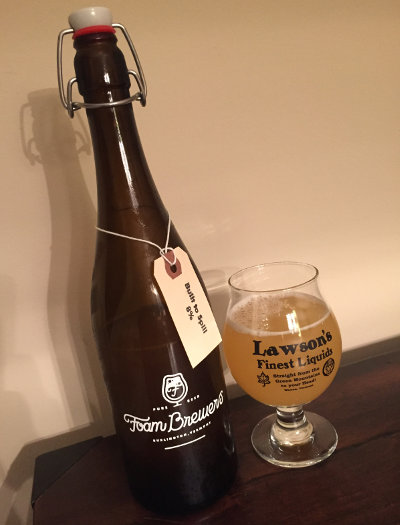 Foam Built To Spill – Pours a very hazy, very pale straw yellow color with a finger of white head. Smells very nice, sweet, juicy citrus hops, tropical fruit, pineapple, you know the deal. Taste hits a nice balance of sweetness and juicy citrus, hints of bitterness in the finish but it’s definitely on the sweeter side (without being cloying, of course). Mouthfeel is medium bodied and well carbonated, nice balance of sweet and bitter. Doesn’t really drink like a DIPA actually. Overall, this is one damn fine DIPA, holding its own against its VT brethren. A-

Quite a nice first impression. From what I can see, they’re not quite there yet with saisons, but they’re well on their way. Hopefully by the time I make my triumphant return (and I will most certainly be returning here), they’ll be nailing those down too.