These days, anytime I get a chance to snag a bottle of barrel aged Midnight Sun beer, I jump at the opportunity. This Belgian Style Barleywine aged in High West bourbon barrels was no exception. Looking into it a little more, it seems like this has a pretty interesting heritage. A little over ten years ago, Midnight Sun celebrated their 1000th batch of beer with, you guessed it, a Belgian Style Barleywine aged in bourbon barrels called simply “M” (I knew Roman numerals were good for something). These days, this concept isn’t particularly noteworthy. Everyone does this sort of thing. Hell, even I’ve homebrewed a bourbon oaked barleywine (that I’m positive is drastically inferior to anything produced by Midnight Sun, I’m the worst). But back in 2005? It was apparently a revelation. Bottles of M are among the most prized beers in existence, going for thousands of dollars at auction. Why? Partly it’s the rarity, but it is also supposed to be uniquely well suited to aging. Ratings are still sky high, even a decade after bottling.

Of course, I have not had M, nor does it seem likely that I ever will. However, as you might imagine, the requests to Midnight Sun to rebrew it are numerous. A couple years ago, current brewer Lee Ellis answered some questions about M and let a few interesting nuggets slip. To bring this digression into relevance, here’s a few quotes:

Hmmm, I’ll just say that if we did re-release it, we wouldn’t call it M. It is impossible to re-create it exactly. While Gabe Fletcher was an amazing Brewer, he sure sucked at documentation.

…As for more M, I’ll say that Termination Dust is probably the closest re-creation we have done to date. Fairly similar malt bill, and very similar yeast blend. But again, it’s kind one of those “that time, that place” beer. I love making big, dark, barrel aged belgians, stouts, and barley wines. Our Alaskan clientele demands it. As we say, session beers start at 8% up here.

Well that’s nice to hear! Naturally, this beer doesn’t seem to be making the waves that M did, but perhaps in a few years, these bottles will emerge as a wale, bro. Or M was just that ephemeral, one of a kind brew that will never be replicated.

Hope springs eternal though, so let’s take a closer look. Termination Dust is basically the first light snow that signals the end of summer, something that generally carries more weight in a land of extremes like Alaska than it does for us doofuses down here. Brewed with a blend of Belgian yeasts and aged in High West barrels, this clearly isn’t an exact duplicate of M. For one, it’s a little stronger, and for another, High West didn’t exist back in 2005 (and presumably, higher quality barrels were much more widely available back then). Still, this is Midnight Sun we’re talking about here, so let’s dig in: 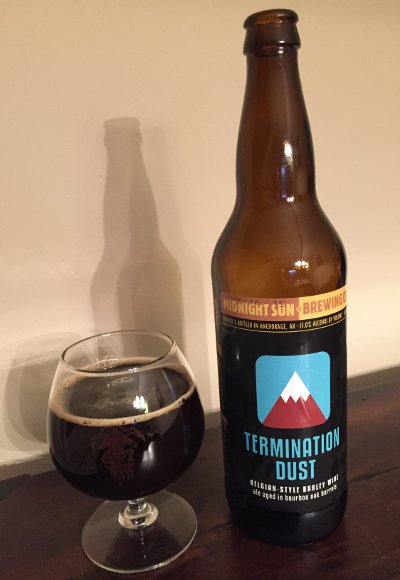 Midnight Sun Termination Dust – Pours a very dark brown color with half a finger of tan head that is relatively short lived. Smells of caramelized brown sugar, bourbon, oak, some fruity esters, faint hints of spice. Taste hits those brown sugar notes hard, toffee, caramel, maybe even some Belgian yeast spice, and that boozy bourbon, vanilla, and oak. Very sweet, and even moreso once it warms up, though the spicy phenols also come out more. Mouthfeel is full bodied and rich, moderate and smooth carbonation that fits well, a little boozy heat. Overall, certainly another winner from Midnight Sun, though I don’t think it’s better than Arctic Devil. Yet. I think this could age fabulously, so let’s check back in a few years, shall we? Still, this ain’t no slouch, so we’ll go A-

I shall have to track down another bottle of this stuff to age. In the meantime, I’m sure we’ll be seeing more from these Alaskan ballers soon enough.