You can’t read a book about beer without running into the Reinheitsgebot; the fabled German beer purity law that sez only “malt, hops, yeast and water can be used” to make beer. There’s something to that, of course, and lots of great beer is made that way. But there is a lot to be had outside the Reinheitsgebot as well. Don’t take my word for it, even the Germans recognize certain historical and regional styles that wouldn’t fall under the law as beer. Take Gose, traditionally made with salt and spiced with coriander, yet it is covered under and exception.

Then again, this particular German Gose is not, because they add Rhubarb to tart things up a bit (and least, that’s what I assume, though the bottle I have here sez “German Beer” on the label, so who knows what’s going on). Freigeist is the experimental arm of a more traditional brewer, Braustelle. They make all sorts of weird stuff, often in the berliner weiss or Gose mold and usually taking an unconventional approach to even those styles. Their approach seems similar enough to our freewheeling American environment, which I guess explains a fair amount of collaboration in the US, including local Kaedrin compatriots at Teresa’s Cafe and Victory. Freigeist translates to “Free Spirit”, so I guess they’re Dharma to Germany’s Greg*, eh? 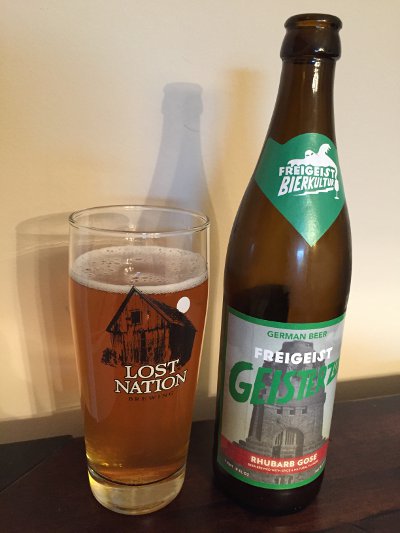 Freigeist Geisterzug Rhubarb Gose – Pours a slightly hazy golden color with a finger of white head that has decent retention. Aroma definitely has that lacto funk to it, sweet with hints of fruit, some spice notes too, maybe coriander and wheat or something like that. Taste feels a bit more subdued that expected, subtle notes of malt and wheat, that Gose salinity kicking in midway through, levied by tart fruit towards the finish. Mouthfeel is light to medium bodied, moderate carbonation, low acidity, and it finishes pretty dry. Overall, this is a nice beer, nothing to go cuckoo nutso about, but worthy. I do wonder how fresh it is though, and I suspect it’s been sitting on the shelf for a while – would definitely give a fresh bottle a look, as I suspect the fruit character would be more prominent… I’m feeling generous though, so we’ll give it a B+

Would definitely take a flier on more of their stuff, especially if I see a fresh shipment or something…

* Kaedrin: Come for the beer, stay for the cutting edge cultural references.