For a long time, I kept a running diary of quicky notes for every Tired Hands beer I drank, resulting in epic recaps of hundreds of beers. Given that they put out a few new beers every week, this was obviously not sustainable, especially once they opened the Fermentaria (their new production facility). However, I am a part of the Believer’s Club, so I’ve kept up with the bottle releases pretty well (the cans, uh, not so much, since those releases are during the week and, you know, I have a job and all that). As a result, I’ve had some notes piling up for a while now, and I thought it was time to do a quick recap of the past half a year or so’s worth of releases, starting with one of my favorite Tired Hands beers (and definitely the best thing to come out of the Fermentaria yet): 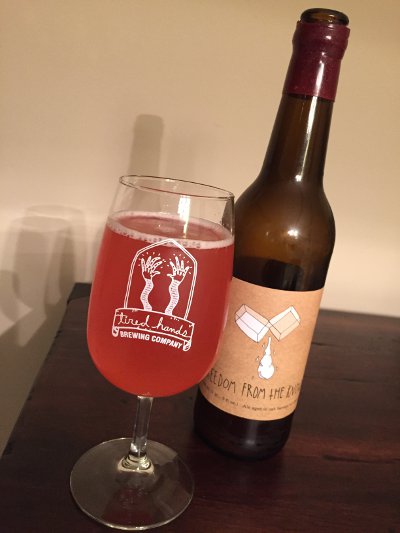 Freedom From the Known – This beer was a revelation when it appeared on tap, like pure sour cherry juice mixed in with Tired Hands’ house saison style, it was brilliant. After bottle conditioning for a few months, it loses some of that fresh fruit juice feel, but it’s still phenomenally delicious. Pours a striking pinkish hued orange color with a finger of white head. Smells great, oak and vanilla, saison spice, and of course, those cherries, though perhaps not quite as powerful as when this was fresh. Taste starts off with that saison spice, gathers some richness from the oak and vanilla, finishing off with sour cherries. Again, though, the cherries aren’t quite as intense as they were when this was fresh. When it was fresh, it felt a lot like straight up cherry juice with some saison mixed in. This actually feels more balanced though, and the cherries still come through very strong right now, actually moreso than most cherry beers. I suspect further aging will reduce their impact, but this is still great. Mouthfeel is well carbonated, medium bodied, a pleasant acidity towards the finish. Overall, this is different than it was when fresh, but it’s no less delicious, and it’s the best beer they’ve released out of the foudre so far. A 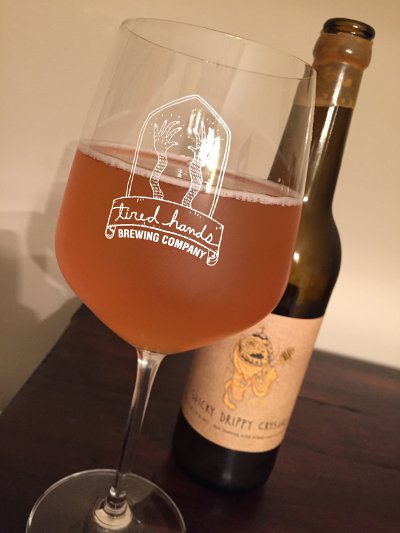 Sticky Drippy Crystals – An oak fermented honey saison. Pours a bright golden yellow color, maybe hints of peach peeking through in the right light, with a half finger of slow-forming white head (nice looking carbonation when you swirl) that quickly resolves down into a cap that then sticks around for a bit. Smells very nice, vinous fruit, oak, yep there’s that honey, definitely some Tired Hands house saison character, spicy with some funky earth. Taste starts off very sweet, lots of vinous fruit and honey, just a bit of that spicy saison yeast, with a tart, lemony finish. Mouthfeel falls down a bit in the carbonation arena; there’s enough that it’s still quite good and drinkable, but perhaps with some age, the carbonation will perk up a bit. I am, as always, overly sensitive to this sort of thing, so make of this what you will. Otherwise, it’s quite bright and medium bodied, a little too sticky (though again, that’s probably a carbonation thing). Overall, this is a pretty solid saison, reminds me of hanging out at the brew cafe (though I guess why wouldn’t it?), and it’s quite tasty. I’m thinking this could be fantastic with some age on it. For right now, B+ 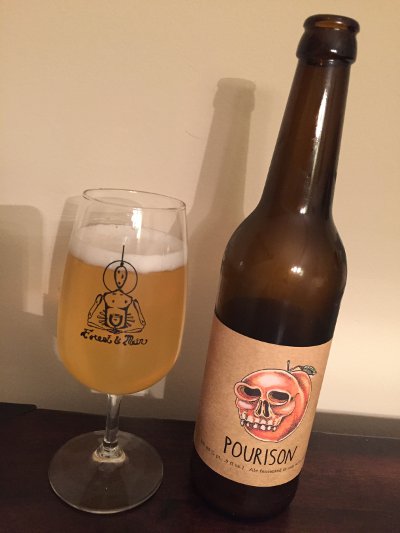 Pourison – So Tired Hands takes their standard SaisonHands, bottle conditions it in green bottles and calls it Ourison (see below). This beer is SaisonHands conditioned atop Peaches and then bottled in their more standard 500 ml brown bottles. Pours a hazy but radiant straw yellow color with a finger of white head. Smell has that Tired Hands foudre character, oak and funk, some stone fruit too. Taste has a light funk and fruit feel to it, breezy and tart, vinous fruit pitching in here too, finishing off with those peaches. Mouthfeel is light bodied, crisp, mild but pleasant acidity, quaffable. Overall, this is a nice little number, perhaps not quite Emptiness levels awesome, but still worth the stretch. B+ 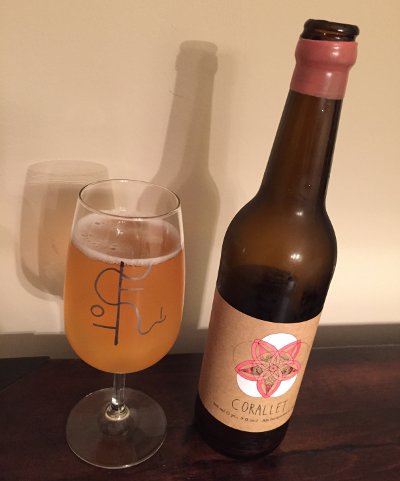 Corallet – Pretty standard foudred saison setup here, with some rye and wheat. Pours a pale straw yellow color with a finger of white head. Smells funky, a little saison spice and earth. Taste has some tart fruit going on here, maybe sour cherry, but very light, hints of funky earth and maybe a bit of oak. Mouthfeel is crisp and light bodied, very slight acidity, quaffable. Overall, a solid little foudred saison, but not much to separate it from the pack. B+ 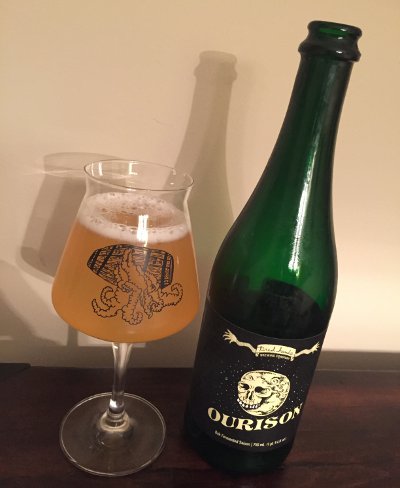 Ourison – Basically bottle conditioned SaisonHands. Pours a hazy yellow color with a finger of white head and a little lacing. Smell has a strange, almost skunky aroma going on along with the more typical saison spice and tart fruit. The skunkiness fades a bit as I drink, but it was there. Not sure if this was intentional or not (it’s bottled in green glass), but I’ll have to check out another batch or something as most reviews don’t seem to mention this. Taste is sweet with a little yeasty spice, and a nice, light tartness (no skunky character here). Mouthfeel is medium to low carbonation, very light, quaffable, and dry. Overall, not sure about that skunky note, but otherwise this is good. B- or B? 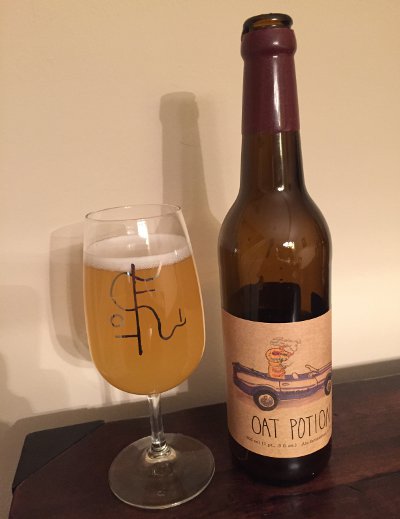 Oat Potion – Saison brewed with oats and NY wildflower honey, a collaboration with NY’s Other Half. Pours a cloudy straw yellow color with finger of white head that leaves a bit of lacing. Smells of vinous fruit, white wine, oak, and funk. Taste starts off sweet, hits those vinous fruit notes hard, then oak, followed by some earthy funk and finishing with a tart note. Mouthfeel is crisp, light, well carbonated, very light acidity. Overall, this is actually the best bottled Tired Hands beer in a while. A- 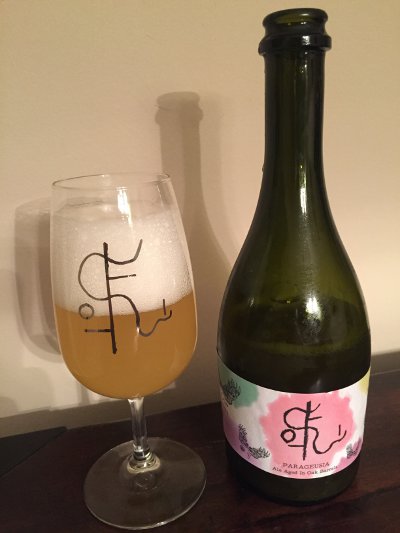 Parageusia47 – Typical trippy backstory for the Para series, but this is basically a Mosaic dry hopped saison/IPA hybrid aged in Vin Santo barrels with Para microflora. Pours a cloudy yellow color with tons of fluffy, bubbly head, good retention, and even a little lacing. Smells great, citrusy American hops are all over the nose, along with vinous fruit, sweet candi sugar, maybe hints of funk and oak. Taste feels oddly muted, but all the components are there. Sweet, fruity, with those citrus hops hitting pretty hard, but not as much in the way of oak as expected, a light tartness in the finish. Mouthfeel is light bodied, crisp, and dry, yet it retains a sizable acidity. Overall, I can never really seem to get on board the hoppy sour train, but this works ok enough. It just doesn’t really stand up to the other Parageusia beers. B+

Phew, that just about covers it. I’m sure many good things to come from Tired Hands, so stay tuned. Also, if you’re going to the Fermentaria Anniversary, give me a shout…