Given my heritage, it’s surprising how little Italian beer I’ve sought out. I suppose most Italians reach for a glass of wine with their meals, but I’ve been hearing for years that the Italian beer scene has been exploding. Alas, I’ve not had a ton of great Italian beer. I’ve always chalked this up to availability. It’s not like Italians are getting that sweet Tired Hands juice on the reg, so it stands to reason that I’m not seeing the best of their scene either. A friend who recently went to Italy mentioned that a lot of wineries sorta do brewing on the side, stuff that I assume doesn’t get distributed far and wide. This obviously means I need to get off my arse, renew my passport, and tour some Italian winery/brewery hybrids.

In the meantime, I’ll have to make due with the stuff that does find its way over here. The Italian beer I have enjoyed usually has a distinctly Belgian bent to it, and this is no exception. Indeed, look closely and you’ll see that this is a blend of Birra Del Borgo’s standard Duchessa saison (not a particularly heralded beer) and 1 year old lambic. Upon even closer inspection, it turns out this is a collaboration with Cantillon. I mean, if you’re going to blend 20% of lambic into your beer, I guess Cantillon would do the trick. Maybe. The releases of this are somewhat irregular and they apparently sometimes suffer from that ropey Brett viscosity (drinkers of Fantome know what I’m talking about) that they fix before it’s released (there’s a video explaining this… but it’s not subtitled, so have fun with that.) Anywho, this marks the second time in the past month that I’ve drank a beer blended with a small amount of lambic. So far, these don’t seem to have the complexity or elegance of their fully lambic counterparts, but the blending does add some nice notes for sure. How does this one fare? 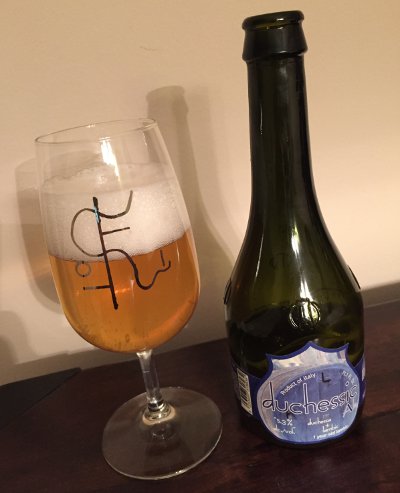 Birra Del Borgo Duchessic Ale – Pours a hazy yellow color with a few fingers of white, fluffy head that has lots of retention and leaves tons of lacing as I drink. Smells of Belgian yeast, a little bready, some spicy phenols, and plenty of fruity notes, but then the lambic makes itself known with hints of musty, earthy funk and tart fruit. That lambic funk comes out even more in the taste, which has a very nice little tartness to it, fruity and a little funky. Mouthfeel is highly carbonated, crisp, and effervescent, lightly acidic and absolutely bone dry. Overall, this is a nice catch for those looking to get a mildly Cantillon-esque feel, and it comes off like a tart saison (which, I guess, is what it ultimately is). Well worth seeking out, though not quite mind-blowing in complexity. B+

I don’t know how widespread this was distributed, but I know of at least two places that have it sitting on the shelf right now, and they’ve been there for a while. I guess being sequestered in the Italian beer section gets them passed over or something. I should really seek out more of my Italian brethren’s beer sometime. For now, I think I’ll just snag some Italian wine for the upcoming beer fast…