Let’s talk S.H.I.T. Acronyms are fun, you see? Kudos are certainly due to The Bruery for this beer, but there are obviously hundreds of other humorous examples of this sort of thing. The Bruery clearly did this on purpose, as did my first encounter with this sort of acronym: 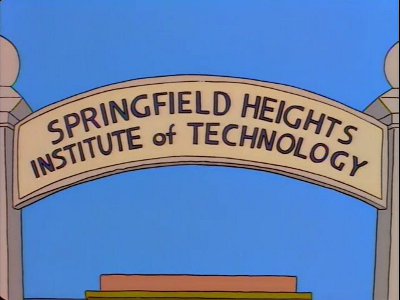 Ah, Springfield Heights Institute of Technology. It turns out there is a long and time-honored history of urban legends wherein some institution, business, or school inadvertently wanders into an embarrassing acronym. I remember joking with a college buddy about that Simpsons episode, and he mentioned that his college, Stevens Institute of Technology, was once a S.H.I.T. school (Stevens Hopkins, I believe, though I can’t seem to find confirmation of this). The typical example is actually Sam Houston Institute of Technology, but like most of these, it appears to just be an urban legend (along with many other organization acronyms that break down into curse words).

Anyway, this beer is billed as the “more affable” version of Black Tuesday, The Bruery’s massive 19% ABV Bourbon Barrel Aged Imperial Stout. Clocking in at 14% ABV, this… isn’t that much more affable, but given the large bottle formats, I’ll take it. I drank this on a Friday, but heck, I’ll review it on a Tuesday.

Actually, so happens it’s Fat Tuesday! This means I’m about to embark on my annual semi-hiatus from beer. Never fear, the blog will remain active during the next month or so. I will have some beer reviews to catch up with, and of course I’ll be writing about other beverages of note (always attempting to put a beery spin on things). But I digress, let’s get back to this beer: 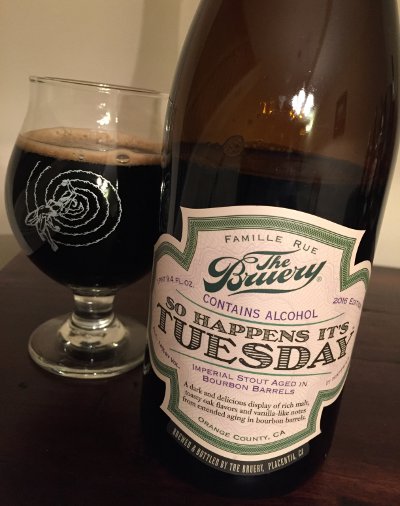 The Bruery So Happens It’s Tuesday – Pours a very dark brown, almost black color with a finger of light brown head. Smells great, lots of caramel, vanilla, and chocolate, with the oak and bourbon pitching in quite assertively as well. Taste is all rich caramel, vanilla, and oak, sugary sweet, and as it warms you get more sorta milk chocolate, but not really much in the way of roast. It also gets a little more boozy as I drink on, but that’s to be expected I think. Mouthfeel is full bodied, rich, and chewy, moderate carbonation (perfect for the style), and definitely a boozy bite, especially in the finish. It’s a warming beer, that’s for sure. A very nice sipper though, excellent to share, but something you could make a night out of if you were so inclined (though it’s still a bit of a feat). Overall, it’s not Black Tuesday, but it’s quite good. A-

Believe it or not, I actually had a few ounces of Black Tuesday just a few days before this one (at a share) as well as Wineification III (which is Black Tuesday aged on French Oak with wine grapes), and while they are both quite intense, they also seemed more integrated. Balanced is not a really a term you use with a beer like Black Tuesday, but for it’s richness, intensity, and alcohol level, it kinda is balanced. I am, of course, ever on the lookout for other variants (of which, there are many!), though I don’t have plans to tackle any of those anytime soon.