Over the past several months, I’ve been dipping into my cellar to try out some aged beer. You may have noticed a few of these showing up on the blog already, but I’ve been keeping a running log of some of the less unique bottles I’ve opened as well. Some of these were aged intentionally, some were just sitting in the back of my fridge or in my basement for far too long. What can I say, sometimes my eyes are bigger than my liver. My cellar isn’t as insane as many you’ll see out there, but it’s getting sizable, so I sometimes try to take a break from keeping up with the new releases and check out some of these old suckers.

There’s something very romantic about aged booze, I think, but with beer it’s a bit of a dicey proposition. It’s rare that I’ve had a beer get better over time. It can certainly be different, and that’s not necessarily a bad thing, but it’s also not usually what you expect. It’s worth trying, but if you ever find yourself with a nice bottle of something that might age well, drink it fresh. If you can snag another bottle, age that. If not, just be happy you got your hands on a fresh bottle. Let’s take a closer look at some of these: 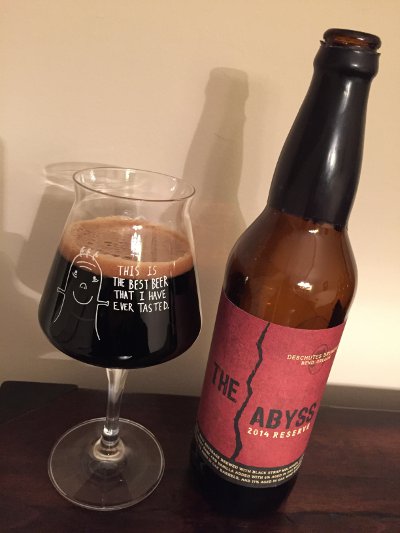 2014 Deschutes Abyss – Finally got around to drinking one of these Deschutes beers after their “Best After” date (usually a year in the future when they release the beer). Pours a deep black color with a finger of light brown head, very nice. Smell brings a lot of the non-stoutlike elements to the fore, vinous fruit, caramel, anise, liquorice, vanilla, maybe even some dank hops. Taste starts with rich caramel, moves right on to more fruity notes, followed by a wallop of dry hop bitterness. As it warms, I get hints of that roasted malt character that I found much more prominent in fresh Abyss. Mouthfeel is full bodied, well carbonated, more dry than I remember it being fresh. Overall, I don’t know that it’s improved with age exactly, but it feels very different and it’s certainly not worse, making it an interesting candidate for aging. A- 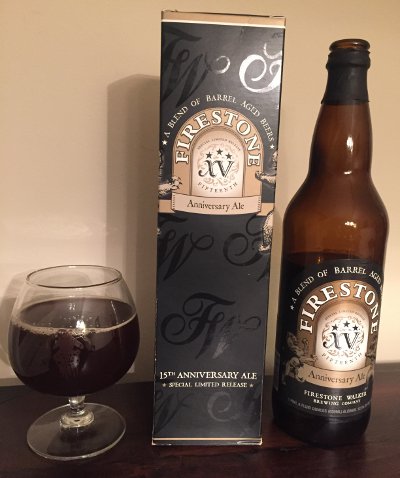 2011 Firestone Walker XV Anniversary Ale – My first Anniversary Ale, this one lives up to my memory. A bottle shop recently celebrated their anniversary or something by releasing a bunch of aged beer, and I managed to snag this one (so it hasn’t been sitting in my cellar for quite so long, probably wouldn’t have lasted!) Age has treated it well, though I don’t think it’s any better than it was back in the day. With time, it’s got a little less zip, but the flavors have blended together more. It still feels very barleywineish, lots of dark fruit, rich caramel, some nice barrel character. Overall, this was worth aging and is doing well these days, but it was probably still a little better when it was fresh. This is probably good advice overall for the Firestone Anniversary beers – worth aging, but not at the expense of drinking it fresh. A- 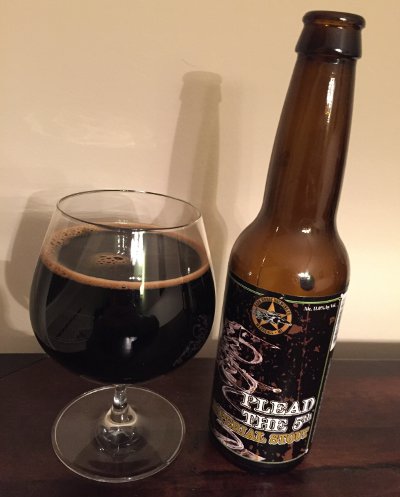 2013 Dark Horse Plead the 5th Stout – This has held up well. The intense roasty character is much faded, only really revealing itself in the finish. In its place we get caramel and an almost dark fruit note, like port wine or something. This hasn’t really been my favorite stout, but it holds up well. B+ 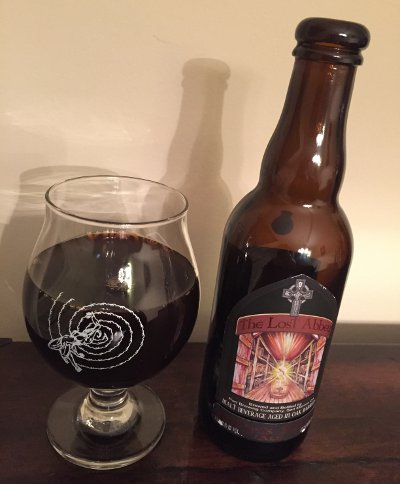 2011 Lost Abbey Angel’s Share – Bourbon Barrel Aged – The first time I had this, I thought it was a bit hot and could use some aging. Fortuitously, I came into a bottle not long after, and promptly hid it away in my basement and basically forgot about it. What was lost was found, so I figured 4 years was long enough to age the sucker. Wow, just look at that head. Yes, this was before Lost Abbey got their carbonation game on track. Fortunately, this is a tasty beer. Age is definitely showing, some oxidation apparent, but it still smells and tastes great. Great dark fruit character matches well with the bourbon barrel treatment, reminiscent of early Bruery Anniversary beers. Age definitely mellowed the booze, though perhaps not as much time is actually needed to accomplish that feat. Carbonation is an issue for me. Verdict: Uncertain! Newer vintages are better carbonated and might hold up better. I’d say 1-2 years is ideal aging time. B+ 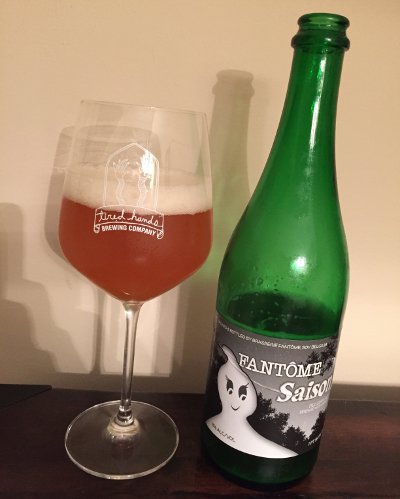 2013 Fantôme Saison – From the Smoketôme era, I was curious to see if the smokey, burnt latex funk worked itself out over time. The answer? Nope! I suppose it’s probably mellowed some, but I feel like all the elements mellowed, so the smoke is still there in the same proportion as before. Like my other bottle, this isn’t dominated by the smoke, and it adds a sort of complexity rather than straight burning latex and bandaids (as some of the worst Smoketomes exhibited). I really wish I had saved some of my first bottles of Fantome though, from the 2009-2010 era, as those were really special, even if I had no idea what I was drinking at the time. If you’ve got a smoketome, I say hold on to it. Let’s see how that bitch tastes in 5-10 years, eh? C+ 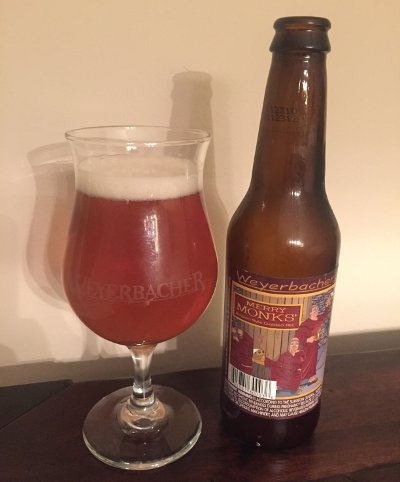 2010 Weyerbacher Merry Monks – Back in 2010, I bought a variety case of Weyerbacher, and promptly found myself disappointed by this beer. I gave it a few tries, but this one just sat around for, well, 5 years I guess. It was time. Pours a cloudy golden orange color with a finger of white head. Smells sweet, lots of raisins, maybe a hint of spice. Taste is again very sweet, and again has tons and tons of raisins. Mouthfeel is well carbonated but almost creamy in texture, really nice, but as it warms, a boozy note hits pretty hard. Overall, this is maybe an improvement over the regular, but I’m not really a fan of either. B- 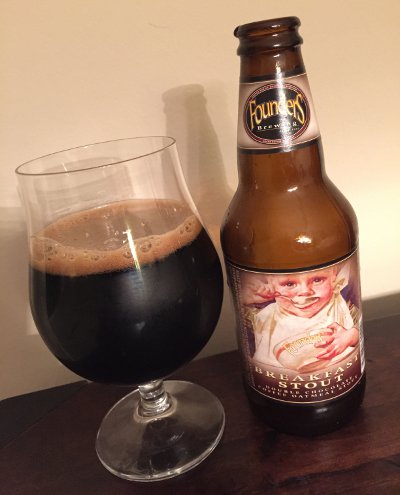 2010 Founders Breakfast Stout – Pours a pitch black color with a gorgeous light brown head. Smells of coffee and creme and more coffee, roasty coffee, spent coffee grounds, did I mention coffee? Taste features lots of that roasty character, less intense coffee here but it’s still pretty prominent. Coffee is supposed to fade over time, but this is still pretty intense, even more out of balance than when fresh. Mouthfeel is medium bodied, well carbonated, a little thin actually, though it feels more full as it warms. Overall, I like this and it’s held up remarkably well, but it’s still not a massive improvement over the base, which seems more balanced. B

Of course, this barely puts a dent in the cellar, so after this semi-hiatus from beer, expect to see some more of these aged beer reviews. In the meantime, I’ve got some wine, bourbon, and Scotch coming your way. And maybe a few more beer posts peppered in…