About 4 years ago, I waited in line at my first beer release. I have since cycled through degenerate FOMO line-waiting and beer-hunting into a much more relaxed cadence. But it all started with Victory’s Dark Intrigue in an event dubbed Dark Wednesday. Releasing something special on the day before Thanksgiving has become something of a tradition for Victory, though for reasons unknown, they never revisited Dark Intrigue (and claim they won’t make it again). I loved that beer when fresh, and since I bought a case of the stuff, I’ve enjoyed checking it out over time. Other releases included Red Thunder and Earth & Flame.

The hype surrounding these releases has died down, but they’re definitely worth checking out. Victory has grown considerably since then as well, opening new brewpubs throughout the area and even a new production facility in Parksburg. This year’s Thanksgiving Wednesday release was called Java Cask, a bourbon barrel aged imperial stout made with coffee from local restaurant and indie rock venue, Johnny Brenda’s. Unlike Dark Intrigue (or indeed, most of Victory’s barrel aged efforts), the base beer does not appear to be something in the regular lineup, and the result clocks in at a whopping 14.3% ABV (to my knowledge, the highest they’ve ever brewed). It was much anticipated locally, but since the release was spread out across several locations, it was all very low key. I rolled up a little after opening, waited about 5 minutes and got myself some bottles. That being said, there wasn’t that much left and I’m told it sold out not long after I snagged mine…

I love the local brewing scene, but I have also noticed a distinct lack of great bourbon barrel stouts. With Java Cask, we’ve now seen two new BBA Imperial Coffee Stouts in the past year alone (the other being Weyerbacher’s Sunday Morning Stout). This is nice, but given my legendary aversion towards coffee, I wouldn’t mind seeing some non-coffeed versions floating around every now and again. A man can dream. That being said, I feel like I’m gaining a better appreciation of great imperial coffee stouts, so let’s get to the main event. Since I’m a glutton for punishment, I rooted around my cellar and found a bottle of Dark Intrigue to commemorate the occasion and compare both Dark Wednesday beers. Totally unfair comparison, but fun nonetheless. 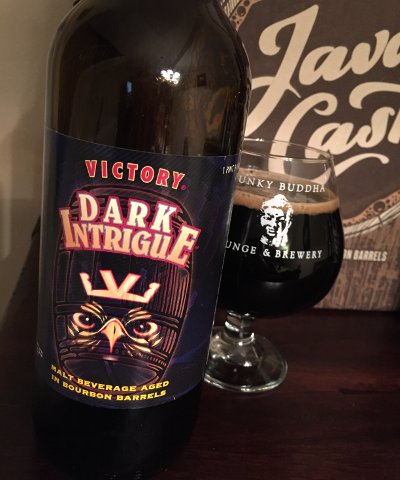 Victory Dark Intrigue 2011 – This is long past its prime, but it’s still a worthy pour. Faded piney, resinous hops and oxidation are prominent, but the malt backbone and barrel aging keep things interesting. It felt much better integrated when fresh or within 1-2 years. It’s fine now, just very, very different, and the bourbon barrel character has faded. If you have one of these tucked away, it’s probably long past time to drink it, but it’s still worth checking out. Chalk this one up in the “drink one fresh, save one to age” category… Difficult to rate this one, but if this was my first taste, it’d be somewhere in the low B range. 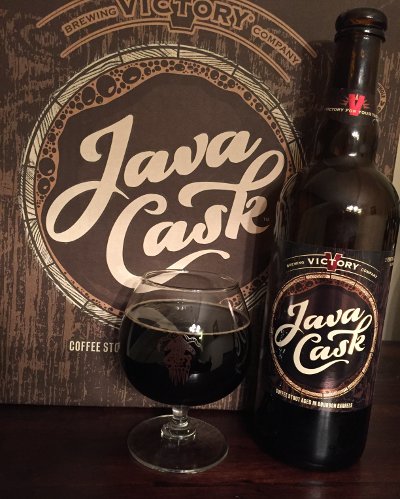 Victory Java Cask – Pours a deep, dark, oily brown, almost black color, thick looking, with half a finger of very short lived light brown head. Smells of coffee, coffee, and more coffee, roast coffee, chocolate coffee, and did I mention coffee? It’s got a lot of coffee. Taste is less coffee focused, though it’s still playing a lead role. Starts off sweet, with rich caramel, milk chocolate, dark chocolate, roast, and finally that coffee really takes over in the finish. As it warms, it gets more complex and the flavor elements come out more. Mouthfeel is full bodied, rich, and chewy, well carbonated, and plenty of boozy heat. This is a delicious, intense coffee stout, and if I wasn’t such a coffee ambivalent fella, this would be full on A material, but I’m not, so you get A-

It’s been a while since I’ve reviewed a Victory beer, which is weird, since they are one of my most reviewed breweries. This was great, but man, I really want a non-coffee version of this. Fingers crossed that we’ll see something like that in the future.