I was going to put a bunch of effort into working a Le Cercle Rouge reference in here, but I figured the tenuous connection (zomg, they both use the French word for Red) and obscurity means I shouldn’t bother. Any Jean-Pierre Melville fans in the house? No? Alright then, moving on.

This is yet another in Cascade’s long line of sour ales; a blend of red ales that were aged in oak wine barrels and oak foudres for for up to three years. Previous iterations have mentioned that it was a blend of as many as nine lots of beer, which is always an interesting exercise. Sometimes blending can add complexity and balance, other times it just sorta levels out all the spiky bits, covers up imperfections, making for a less complex but more consistent beer. While this is certainly another Cascade win, I’m also betting this trends towards the latter speculation. This is still very good, but it doesn’t really stand out if you know what I mean. Or not. I’m not even really sure what I mean by that. Give me a break. Let’s take a closer look at this “red blooded” sour and plan some elaborate beer heists: 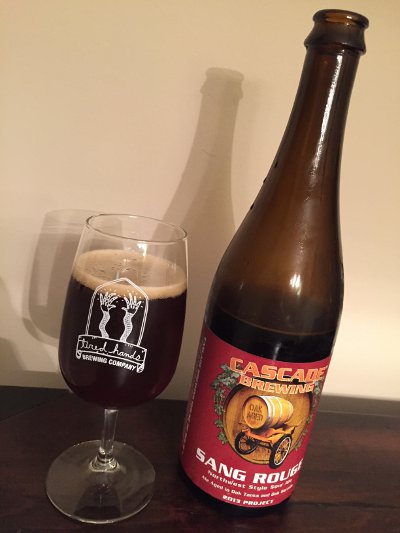 Cascade Sang Rouge – Pours a clear but very dark amber or ruby color with a finger of fizzy but long lived off-white head. Smells great, vinegar, cherries, musty funk, a little oak and vanilla too. Taste hits those sour notes pretty hard, sweet, tart fruit, cherries, blackberries and the like, some of that oak and vanilla pitching in where it can, then more sourness. Mouthfeel is medium bodied, some oaky richness, well carbonated, plenty of acidity. Overall, a nice little sour number. Could be an A-, but I’m not feeling generous at the moment, so B+

Cascade certainly has their house sour style dialed in, and with a single freak exception, I’ve enjoyed everything I’ve had from them. I’m sure this won’t be the last we see of them on the blog…