I wondered if it would be too on the nose to drink some Wild Turkey on Thanksgiving, and I was reliably informed by Josh of Red, White, and Bourbon that this was an “Almost mandatory” practice. I see Sku also likes to get in on the action as well. It’s all in corny fun, I guess. (Get it? Corny? Like bourbon is made from mostly corn? Alright, that pun has got to be much worse than drinking Wild Turkey on Thansgiving, right? I’ll stop now.)

If I’m reading the whiskey nerd community right, it appears that Wild Turkey has fallen on hard times of late. This seems to primarily be due to lackluster special releases that nevertheless ran high on pricing. Even some of their standard offerings disappeared for a while, and I know many lamented the temporary loss of budget favorite 101 Rye (it is back, though I have never seen a bottle). At least one recent special release has garnered some praise, even if it seems on the pricey side. But as a part-time whiskey dork, I’m still working my way through the standard expressions out there, so all this talk of disappointing $250 bottles of bourbon don’t really phase me. When I saw this private selection at State Line Liquors this summer, I took a flier on it.

From what I hear, Wild Turkey does two things differently than most distilleries. First, they make a big deal about using the #4 barrel char level, also called “alligator” charring because the oak splits and looks a little like alligator skin, but near as I can tell, the grand majority of bourbon you’ll ever see on a shelf uses #3 or #4. Second, they tend to put their juice in the barrel at a lower proof than most other bourbons. This seems to be a true difference, not just marketing fluff (as evidenced by the fact that they don’t seem to trumpet this the way they do with the char level). I’ve also heard that master distiller Jimmy Russel (this bourbon is named after him, BTW) has tried to keep the process identical during his tenure, which is saying something since he’s been at the job for 60+ years (his son Eddie is also helping).

Single barrels are, by their very nature, inconsistent, but even then, I’ve seen mixed reports. Some seem to have gotten an exceptional barrel, most seem to get more middling efforts. How lucky will I be? 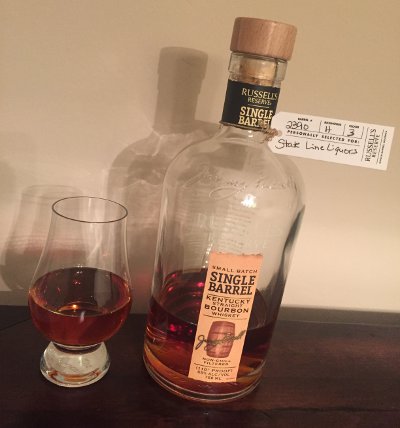 Wild Turkey Russell’s Reserve Single Barrel Bourbon – Private Selection (State Line Liquors) – Pours a dark golden orange color with moderate legs. When I first opened this bottle, I was really worried, as it smelled like turpentine and was quite harsh. Fortunately, after a bit, it opened up and mellowed out. Smell is all caramel, toffee, and charred oak, a nice combo for sure. Taste hits those caramel and toffee notes, lots of oak too, maybe some vanilla, on the sweeter side, with only a little spicebox pitching in. Mouthfeel is rich and sweet, and I know this is perhaps redundant, but a little on the boozier side. At 110 proof, that’s to be expected, I guess, and my baby beer palate isn’t used to that, but even for that proof, it feels a bit hotter than normal. Water mellows it out some. It generally feels off balance, though not dramatically so. Overall, this is a nice dram, certainly worthy of a try and I’m glad I snagged the bottle, though it feels a bit one-note and I don’t think it really approaches the better bourbons that I’ve had. B

Beer Nerd Musings: My initial thought is that Wild Turkey’s unique attributes, like their lower entry proof, would make for interesting bourbon barrel aged beer. However, in my experience, beers aged in Wild Turkey barrels have been somewhat disappointing. Anderson Valley supposedly only uses Wild Turkey barrels for their program, but while Huge Arker was nice, it’s not really top tier stuff either (and their other entries are not quite at that level either – generally having a surprisingly low bourbon barrel character). Local favorite Neshaminy Creek has used Wild Turkey barrels a few times. I haven’t had the barleywine, but the first BBA Leon they made was a middling effort as well (then again, so was the second vintage, which used Buffalo Trace barrels – I think the base beer is the determinant factor there, or perhaps the process). Oskar Blues made a Wild Turkey variant of Ten Fidy and last year Goose Island released a BCBS single barrel or something too (one suspects that WT barrels are part of the blend for regular BCBS and variants). Both of those have much better ratings than the ones I’ve had, but I’m still not quite inclined to use this stuff in my homebrew or anything like that (if I ever get around to it, that is!)

Hey look, I’m not the only beer dork drinking a Russel’s Reserve retailer selection, and it appears DDB has a similar reaction (though, as always, he doesn’t beat around the bush the way I do). Go figure. I’ve got some big guns coming in the Bourbon department though. Stay tuned for some Four Roses single barrels and, at some point, some Stagg (I am one of the few, the proud, the lottery winners in PA). And I’ve actually got a couple other bottles of interesting whiskey, so there’s that too.